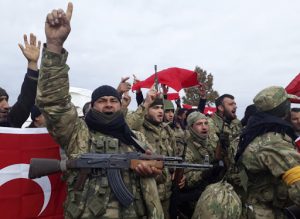 Since the Turkish offensive into Syrian Democratic Forces (SDF) held territories in October 2019, local Kurdish media reports of the Turkish intelligence agency’s operations to free ISIS affiliates have started to ring alarm bells. And increasingly, Turkey’s relationship with ISIS affiliates operating in Syria have come into question, like reported by alarabiya.net.

The following month in November, the predominantly Kurdish US-allied SDF’s counter-terrorism unit arrested members of an ISIS cell involved in smuggling the organization’s affiliates out of northeast Syria. Furthermore, counter-terrorism investigations uncovered that the Turkish National Intelligence Organization, known as MIT, had commissioned Abu Naji, a leader of the Turkish-backed Ahrar al-Sham paramilitary group, to smuggle ISIS family members out of al-Hol camp, according to a statement by SDF-affiliated Manbij Military Council. Naji had previously carried out several bombings in Manbij and Hasakah, the statement said, local Kurdish media reported.

On July 17, Turkish media, including state-run outlets, published a report hailing a successful operation in the northeast of Syria by MIT. The report claimed that MIT “rescued” a Moldavian woman and her four children from the al-Hol camp in northeast Syria, located in territory held by the SDF, where tens of thousands of ISIS members and their family members and affiliates are held at the camp.

The report of Turkey’s involvement in freeing ISIS family members may surprise many who still view Ankara as a NATO ally. However, some experts, have been arguing for some time now that Ankara’s sponsorship of terrorist organizations is much worse than imagined. Michael Rubin, a resident scholar at the American Enterprise Institute, wrote in a 2019 article that “Erdogan’s terror complicity is worse than many imagined.”

Furthermore, Turkey’s history has proven that the West cannot solely rely on Ankara to fight terrorists, as it has been unwilling to take on ISIS directly, a report by US think tank RAND from January 2019 found. Recent developments demonstrate that Turkey has undeniably been lying to America about fighting ISIS, and rather their interests lie in countering the Kurds and Erdogan’s opposition.

The news of Turkey freeing ISIS affiliates from US-backed forces comes after serious concerns were raised about Turkey’s possible knowledge of Abu Bakr al-Baghdadi, ISIS’s notorious leader who was killed in a US raid on October 26, 2019, camping out near the Turkish border, and his replacement who had sheltered in regions controlled by the Turks. After Baghdadi’s killing, former special presidential envoy for the Global Coalition to Defeat ISIS Brett McGurk penned an op-ed in the Washington Post in which he explored Turkey’s relationship with Baghdadi as he was found in northwestern Syria, just a few miles from Turkey’s border and called into question Ankara’s complicity in the affair.

Indeed, the main reason behind Turkey’s continued support of extremist groups, such as ISIS, stems from the fact that Erdogan shares the same values as the Muslim Brotherhood, a group which Erdogan has offered protection to within Turkish borders. As a result of relations between Turkey and the ISIS, members of the terrorist organization and their families seek to go to Turkey as they believe they won’t face legal repercussions there for their decision to join ISIS, a report by the London-based Investigative Journal found.

The Autonomous Administration of North and East Syria (AANES), known as Rojava, has plans to set up an international tribunal to try ISIS members. However, some countries, including the UK, did not support Rojava’s plan, and has even rejected any support of Kurdish officials’ plan about rehabilitation and reintegrating ISIS families and members. A recognition of Rojava would upset Erdogan, and where Western nations still consider Turkey an ally, they can’t risk upsetting Erdogan.

Nevertheless, British officials are now facing a backlash over the handling of the issue and cases such as Shamima Begum’s, a former UK citizen who is currently held at al-Hol camp. Begum left the UK in 2015 to join ISIS, and the UK Home Office has revoked her citizenship; as she seeks to return to the UK, whether or not the UK should grant her citizenship has been the subject of fierce internal debate in Britain.

In essence, Turkey’s involvement in freeing ISIS affiliates has been described by Homeland Security Today as a move that demonstrates Erdogan and his followers support for Jihadi groups has gone from rhetorical to a genuine and cultish support. Further, the move marks a significant security risk. In May, a Nordic Monitor report found that Erdogan’s chief aide Sefer Turan was a staunch supporter of the Egytian Islamic Jihad, an al-Qaeda affiliated group.

In fact, Ankara does not even see the need to hide its undeniable supports for terrorist groups. In January 2019, MIT was accused of sending $600,000 to the al-Shabab terrorist organization in Somalia. Turkey’s anti-Western and pro-Putin position, its totalitarianism, and Western officials’ inability to acknowledge the reality is endangering the security of the West and the Middle East. It is a delusion to think that Turkey is not lost yet, and failing to understand this new Turkey will only compound the disaster.