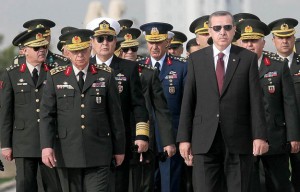 Many commentators have interpreted the decision of Turkey’s president, Recep Tayyip Erdogan, to restart the war against the Kurdistan Workers’ Party, or P.K.K., as designed to undo the results of the June 7 general election. The ruling Justice and Development Party, also known as the A.K.P., was deprived of its majority in Parliament when the pro-Kurdish Peoples’ Democratic Party, or H.D.P., surged at the polls.

On July 28, Mr. Erdogan broke off negotiations with Kurdish leaders. “It is not possible for us to continue the peace process,” he declared on national television. Not only were talks between the government and the militants over, he said, but Turkey was now engaged in a long war against the Kurdish separatist movement.

But it is wrong to view Turkey’s war against the Kurds as Mr. Erdogan’s. The restart of hostilities against Kurdish militants represents a grave defeat for the Turkish president because, in reality, he has ceded political control to the Turkish military.

Mr. Erdogan’s problem was that he couldn’t obtain the absolute power he craved without eliminating his main political rival, the Kurdish H.D.P. This he could achieve only with the army’s help in imposing de facto emergency rule in the Kurdish region. So even if this scheme works in the short term, it will ultimately be a Pyrrhic victory for the president.

However the war goes, it will undo his two major accomplishments. Mr. Erdogan used to be celebrated by supporters of democracy in Turkey for taming the military. He was also on his way to becoming the Turkish leader who brought peace to the country.

Now he has not only sacrificed that legacy, but has also made himself dependent on his former foes: the generals. The war against the Kurds will cement the resurgence of the military, along with its strident nationalism, and turn the relationship between Mr. Erdogan and the generals on its head.

Because the president has had to call on the Turkish armed forces to shore up his authority, he has handed back power to the military. This week, the president ratified a decree from Prime Minister Ahmet Davutoglu to all of the country’s 81 provincial governors transferring responsibility for nationwide counterterrorism efforts to the armed forces.

The Turkish military is gaining ground in more than a territorial sense. Technically, the army acts on the orders of the government when it engages the Kurdish militants. Politically and ideologically, however, the chain of command is the other way around: By burying the peace process with the Kurds, the government has done the military’s bidding.

The military’s general staff was always unhappy about the peace talks the A.K.P. conducted with the Kurdish rebels on and off since 2009. But Mr. Erdogan had cut the military down to size, sending droves of officers to prison in 2012 after an alleged coup plot. With the army leadership demoralized, the president could afford to discount its wishes.

The power struggle that broke into the open in 2013 between Mr. Erdogan and his former Islamist allies, the followers of Fethullah Gulen (a Muslim cleric who has lived in exile in Pennsylvania since 1999), changed the dynamic. Needing the army as a new partner, Mr. Erdogan and his circle laid the blame for the crackdown against the military on the Gulenists. Last year, the president accused Mr. Gulen’s supporters of having staged a conspiracy against the armed forces.

In 2014, the life sentence against the former chief of the general staff, Ilker Basbug, the most senior of the officers jailed over the coup plot, was voided. Upon General Basbug’s release, Mr. Erdogan called to congratulate him, adding that he expected to see the other officers freed, too. More than 200 were acquitted last March, after a retrial.

In August 2014, Necdet Ozel, then the chief of the general staff, for the first time publicly expressed the military’s displeasure with the peace process. He said that the armed forces would “act accordingly” if its “red lines” — the unity of the nation — were challenged. General Ozel was supposed to typify the Turkish military’s new subservience to civilian authority, so it was all the more remarkable to see a chief of the general staff delivering an old-style memorandum to the elected government.

It was Mr. Erdogan’s action that had empowered him to speak like that. Indeed, the military never needed to carry out the veiled threat to “act accordingly,” because the government voluntarily adopted the Kurdish policy prescribed by the generals.

Mr. Erdogan’s declining fortunes have thus restored the power of the military. His weakness made him turn to it because, after the June election, the Kurdish movement stood in the way of his quest to rule by diktat.

From now on, Turkey’s president will be beholden to the armed forces. What this means is that the military will increasingly exploit his dependence to wield power and impose its own policies. Given this collusion between Mr. Erdogan and the military, the prospects for Turkish democracy are bleak.