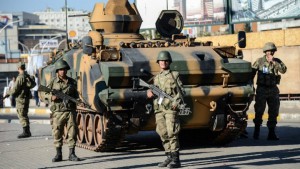 The Turkish army has summoned a meeting of its top commanders to discuss intervention in northern Syria, a Turkish daily has reported.

According to the Hurriyet newspaper, on Saturday the Turkish Armed Forces (TSK) recalled to Ankara the commanders of its troops stationed along the Syrian border, where over 54,000 soldiers – around 15% of the Land Forces total staff – have been deployed.

The meeting is set to discuss the details of a possible intervention, the deployment of 400 armoured vehicles, which would carry military personnel and be protected by jammers against mines laid by the Islamic State group and the role of the Turkish airforce.

Turkey has floated the idea of creating a “safe zone” of 60km in northern Syria in order to counter the various threats that have emerged in the region.

On the one hand is IS who have taken control of the Jarablus border corssing and are currently fighting with other rebels groups for control of others.

On the other hand is the pro-Kurdish People’s Protection Units (YPG) whom the Turkish government regard as terrorists, fearing the increasingly assertive presence of a Kurdish-controlled enclave in the region.

Fighting between all factions has intensified in the north of Syria, particularly in the city of Aleppo where fighting has spilled over into the border town of Azaz which is partially controlled by the al-Qaeda-linked Al-Nusra Front and is under threat from IS.

Last week, demonstrators took to the streets in Istanbul in opposition to war in Syria. Protestors held placards reading “We will defend people’s brotherhood, no to war” and “No to war in Syria”.

Turkish Prime Minister Ahmet Davutoglu last week said there were “no immediate plans” for an intevention, but later added that he would “not wait for tomorrow” to act “in the event of a threat to domestic security”.

Commentators have seen the threat of intervention as eminating from frustration in Ankara that its US allies have not more directly intervened to undermine the Assad government, whom Turkish President Recep Tayyip Erdogan has continuous called for the overthrow of.

“By threatening to intervene in Syria, the Turkish government seeks to change a U.S. policy that it finds potentially very damaging to Turkish interests,” wrote Jeremy Shapiro and Ömer Taşpınar for Brookings Institute. “As Erdoğan no doubt reminded Vice President Biden when they talked the other day, Turkey has the ability to have a far greater impact on the fight against ISIS than the Kurds do.”

“The Turkish government might tell their domestic audiences that a prospective intervention in Syria is to stop the Kurds, but they will tell international audiences that it is to fight ISIS,” they added.

The fear of an emboldened Kurdish presence in northern Syria has been a major headache for politicians and military commanders for a number of years, with concerns that it would embolden Turkey’s own 15 million-strong Kurdish population who have spent decades agitated for civil rights and greater autonomy.

The YPG’s links to the outlawed Kurdistan Workers Party (PKK), who have been involved in a decades-long guerilla war with the Turkish state costing over 40,000 lives, have been the main cause for concern.

The last time Turkey threatened an invasion of Syria, prior to the beginning of the country’s civil war, was in 1998 when the government demanded that then Syrian President Hafez al-Assad stop harbouring PKK leader Abdullah Ocalan, who was then based in Damascus.