You are here: Home / Analysis / Turkey’s mercenarization of war in Syria, Libya and Azerbaijan 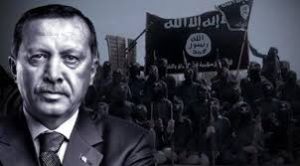 Evidence continues to build of the war crimes of Turkish-backed groups in northern Syria, and now the deployment of other Turkish-backed groups to Libya and Azerbaijan. UN and human rights groups have documented the abuses in Afrin and Tel Abyad by the groups Turkey supports and helped recruit from Syrians. At the same time thousands were sent to Libya beginning in January 2020. Now hundreds have been sent to Azerbaijan to fight Armenians, reports assert, like reported by meforum.org.

What is actually happening here? Turkey’s use of Syrian rebels to go fight its foreign wars is unusual internationally. Most countries do not recruit people from third countries to fight their wars. However, in the past decades the use of military contractors and groups alleged to be “mercenaries” has increased. These include contractors employed by Western powers and in the Gulf, as well as contractors hired by Russia to serve in Syria, Libya and Africa. Turkey’s approach is more complex because it began by using Syrians to ostensibly fight in their own country.

Turkey’s approach to the mercenarization of war was to take Syrians who wanted to fight the Assad regime and recast them as part of the Turkish-backed Free Syrian Army, later rebranded the Syrian National Army. However this “national” force was not so national, it was made up of a variety of groups and they were often empowered by Ankara to commit abuses against Kurds, Christians and other minorities, such as Yazidis. Their language was extremist and often consisted of chants against “infidels,” hatred that is the kind of ideology that underpinned ISIS and other groups. However others argue that what motivated the young men was not religious extremism, but rather money.

This leads to questions about what exactly Turkey has done in creating these legions of shock troops that it used against Kurds in Afrin in 2018 and then again in 2019. The group Ahrar al-Sharqiya that murdered Kurdish activist, the young unarmed woman Hevrin Khalaf, appeared to do so at the behest of Ankara. Do military contractors usually seek out unarmed women to murder them? Not usually. Do mercenaries loot, the way these groups are known for looting? Yes. But do they kidnap and trade in women the way groups such as that Hamza division were accused of doing in Afrin?

This leads to questions about what to make of the plethora of Turkish-backed groups such as Hamza, Jaish al-Islam, Ahrar al-Sharqiya, Sultan Murad and the Suleimani Shah brigade. The groups that went to Libya, between 3,800 and 17,000 of them, included a mix of fighters. Middle East Eye claimed the Suquour al-Sham and Faylaq al-Sham sent men, and The Guardian also highlighted Faylaq al-Sham. More came from the Sultan Murad Turkmen unit, and others from Jaish al-Islam. The Syrian Observatory for Human Rights also said members of the Al-Mutassim Brigade went.

The men who went to Syria include Turkmen units and the Hamza brigade. Some the fighters served in other units prior to joining and going. Members of the Suleiman Shah unit are also alleged to have been sent.

The network of groups that Ankara has used in Syria’s Afrin and Tel Abyad, in Libya and now in Nagorna-Karabakh now are not just a one-time use or unprecedented decision due to necessity, but a cynical and calculated abuse of Syrians of Syrians. Turkey has targeted Syrians who are poor and vulnerable for recruitment. It is unusual for a NATO member to go to refugees and try to recruit them to die in foreign conflicts. Ankara has done this because of international impunity.

The question it raises is why Ankara hasn’t created a more organized method of recruitment and continues to outsource and rely on various units. It doesn’t know what traditional colonial powers did, using Turkish officers and Syrian fighters, like some British colonial units were staffed with. Some have pointed to Ottoman history as an example of Turkey recruiting foreign units, sometimes termed Bashi-bazouk. The Ottomans recruited other units from foreigners, including Janissaries. However the relationship to the Syrians does not appear to be the same. It appears more that Ankara wants to export them to distract them from Ankara’s failures to do much in Syria, getting rid of a large group of armed men who could chafe under Ankara’s rule and who often fight each other.

A way to view Turkey’s use of these fighters is through the prism of the Palestinians. After the 1948 war many millions of Palestinians became refugees and some joined units backed by foreign countries. These Fedayeen fought in many conflicts. They were not usually sent to fight other wars, but they created an armed mass of men that did fight in various roles on sides of conflict, ostensibly against Israel.

Has Turkey created a Frankenstein with these fighters, or a Foreign Legion? Is it feeding off of Ottoman era and colonial history for examples or modern examples of contractors and mercenaries. Clearly the use of the fighters to channel them from fighting the war against the Syrian regime that the fighters wanted, to sending them abroad is a new phenomenon. It is mostly based on lure of pay with some religious propaganda of fighting imagined enemies or “jihad” mixed in. This blend of religious-ethnic-economic incentives is interesting, but it is primarily Turkey that operationalized the abuse of Syrians by sending them to far away places and betraying their fight in Syria to get them to fight Kurds, Libyans and Armenians. The question is whether Turkey will create permanent units, the way Iran has with foreign proxies, or hope that these units dissolve themselves and disappear.