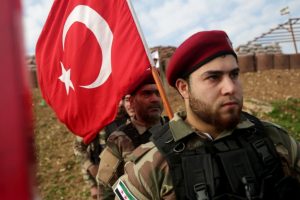 Turkey continues to increase its military involvement in the Middle East and Caucasus regions. Turkey has been accused of transporting Turkish-made military drones and equipment with several humanitarian concerns, like reported by persecution.org.

Turkish mobster Sedat Peker, who has released several viral videos since May implicating high-ranking politicians in criminal activity, recently reported on Turkey’s arms shipments to Syria. Peker spoke regarding a controversy in November 2015 where military equipment was shipped across the Syrian border, ending up in the hands of Jabhat al-Nusra, the Syrian offshoot of al-Qaeda. At the time, politicians commented that the shipments were to support Syrian Turkmen, not terrorist groups. After several controversies around shipments making national news, Turkey changed its tune to justify arms shipments as a broader fight against the Kurdistan Workers Party (PKK). Turkey has fought against the PKK since 1984 and with high levels of domestic support, concerns about the final location of the weaponry died down.

Turkey’s transportation of weaponry continues to Libya, with recent concerns about AI autonomous drones. A recent UN report from Libya experts outlined the potential that artificial intelligence-based drones may have been used in March 2020 to kill enemy troops of warlord Khalifa Hifter. Turkish military confirmed several times that the drone in question, Kargu-2s, was used in Libya, but denied their AI capabilities to select and target individuals. The use of AI-armed drones has drawn significant concern about the future of international warfare and humanitarian protection.

The use of Turkish drones used by Azerbaijan in the Nagorno-Karabakh 44-day war last fall is widely viewed as a key factor lending towards Azerbaijan’s victory over Armenia. It is unknown if the drones used in Nagorno-Karabakh (Armenian: Artsakh) were autonomous or not, though rumors of their presence exist. Footage of Azerbaijani attacks on Armenians was widely circulated on social media and even portrayed on screens in public areas. Footage shows Turkish drones hovering over battlefields, waiting to target the Armenian tanks.

Turkish military equipment is used to fight battles in Libya, Syria, and Azerbaijan, as Turkey extends its outreach and influence.