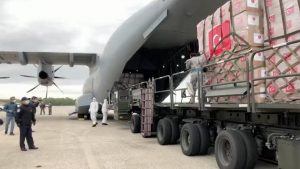 Ankara continues to transfer arms and ammunition to cities in western Libya, as the head of the national interim government, Abdel Hamid Dabaiba, hands over the ministerial formation to the presidency of the House of Representatives, like reported by egypttoday.com.

On Friday afternoon, two planes landed at Wattaya Air Base, which includes Turkish armed advisers, while the third landed at the Misurata Air College airport in the west of the country.

For his part, a professor of political science at Omar al-Mukhtar al-Libi University, Yusef al-Farsi, said that the presence of a Turkish air bridge to western Libyan cities impedes international political efforts that aim to address the crisis by peaceful means that most importantly include the formation of a national unity government that seeks to resolve problems and face the upcoming security, economic, electoral and constitutional challenges.

Farsi pointed to the Libyan people’s suffering from the ravages of war and conflicts by the terrorist groups funded by Turkey, stressing Turkey is trying to seize the wealth of Libya, which has the fifth-largest oil reserves in the world, while the parties of the Government of National Accord (GNA) is biased towards Turkish interventions.

Farsi explained that the Turkish side continues to violate international agreements, especially the Law of the Sea, emphasizing the need for Ankara to dissolve the armed militias inside Libya and integrate moderate elements into security and military institutions, and the need to expel the Syrian militias and mercenaries supported by Turkey.

Meanwhile, Libyan political analyst Ahmed Al-Mahdawi said that the Turkish air bridge hadn’t stopped its flights to the west of the country since the ceasefire was announced in October 2020, noting that Ankara does not welcome the results of the 5 + 5 Libyan Joint Military Committee meetings, and that it continues to transfer mercenaries to Libya to ignite the war and thwart efforts to unify institutions.

The Libyan political analyst confirmed that the Brotherhood is exerting pressure on Dabaiba not to prejudice the memoranda of understanding signed between Al-Wefaq and Ankara, referring to the forceful Turkish presence in western Libya, putting the prime minister in fear of clashing with the Brotherhood and the Turks at this crucial stage in Libya’s history.

In the same context, the Libyan Political Dialogue Forum affirmed that selecting the ministers of the recent government remain the inherent right of Prime Minister Abdel Hamid Dabaiba, with the right to consult with the Presidency Council regarding the selection of the defense and foreign ministers.

The forum further indicated its adherence to the road map for the preliminary stage and the specific dates contained therein, affirming the necessity to respect the stipulated elements in the formation of the government to take into account the efficiency, merit and fair representation, and to ensure the participation of all the society’s cultural components and the substantial representation of women and youth by at least 30 percent.

The Forum for Political Dialogue urged members of the Libyan parliament to “meet urgently to complete the required tasks in preparation for the following stage,” to fulfill the aspirations of the Libyan people and hold the general elections on December 24.

Libya, a major North African oil and gas producer, has enjoyed little peace since the 2011 NATO-backed uprising against Muammar Gaddafi, and the sprawling country has been split since 2014 between rival factions.

One is the internationally recognised Government of National Accord (GNA) based in the capital Tripoli in Libya’s west, while the east is controlled by an administration backed by Khalifa Haftar’s Libyan National Army (LNA).

Last month, participants in a U.N. dialogue in Geneva selected Dbeibeh as prime minister along with a three-member presidency council to act as head of state. All four men have pledged not to stand for office in December’s election.

Dbeibeh’s proposed cabinet will be put for approval to the House of Representatives, a body that has been divided for years after some of its members broke off to form a rival assembly.

House of Representative members from both assemblies have been negotiating in recent days for a meeting to discuss the proposed government that could take place in the frontline city of Sirte.

“We have full confidence in the members of parliament… I am very hopeful that on the day of the session they will approve the government,” Dbeibeh said.

“According to our information from the parliament members, I think they are ready to grant the government approval.”