You are here: Home / MidEastGulf / Turkey’s “boots on the Iraqi ground” 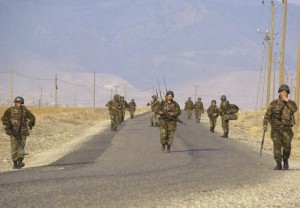 Turkish special forces have crossed into northern Iraq to target Kurdish militants following a series of deadly attacks in the last few days, the Agence France Press reported Tuesday. The move comes amid an intensifying airstrike campaign against militant encampments over the border, following an attack Sunday that left at least 16 soldiers dead. An additional 14 police were killed Tuesday in an ambush by members of the outlawed Kurdistan Workers’ Party, or PKK.

“Turkish security forces crossed the Iraqi border as part of the hot pursuit of PKK terrorists who were involved in the most recent attacks,” a Turkish government source told AFP. “This is a short-term measure intended to prevent the terrorists’ escape.”

In a separate incident Tuesday, fighting between Iran’s Revolutionary Guards and Kurdish rebels near the Turkish border resulted in the deaths of four people, two from each side, the AFP reported separately.

Tensions have risen sharply in Turkey since an attack carried out by Islamic State militants in late July left 31 mostly left-wing activists dead. Kurdish militants immediately blamed the deaths on Turkey’s failure to stem the spread of the Islamic State militant group in the country, and launched a series of retaliatory attacks against Turkish security forces. The violence has re-ignited a decades-old insurgency that had gone quiet in recent years amid peace talks.

In retaliation for Sunday’s attack on security forces, Turkey launched a series of airstrikes against Kurdish rebel encampments in northern Iraq. The country’s state-run news agency said at least 40 rebels died during the overnight operations, which involved more than 50 planes.

Protests against the PKK erupted throughout Turkey following the revelation of Sunday’s deadly attack, as Prime Minister Ahmet Davutoglu vowed to “wipe out” PKK rebels.

Pictures and videos surfaced Monday on social media showing hundreds of Turkish nationalists protesting in the streets, as civilians who were said to be Kurdish laid bloodied on the ground. More than 100 offices belonging to the pro-Kurdish People’s Democratic Party were attacked, as demonstrators reportedly set cars ablaze and targeted Kurdish homes.