You are here: Home / MidEastGulf / Turkey will not send ground troops to Syria 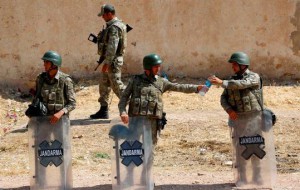 Turkey does not expect to deploy ground forces in Syria to fight ISIS but that option should remain on the table, Foreign Minister Mevlut Cavusoglu said Thursday.

Long a reluctant partner in the US-led coalition against ISIS, NATO member Turkey last month made a dramatic shift in policy, sending warplanes to attack the Islamist hard-line group in northern Syria. It has also opened its air bases for use in coalition airstrikes.

However, it has not launched ground operations in Syria.

“Right now, no ground operation is envisaged, but in the future whatever is needed to fight ISIS – including ground operations – should be done. This is my personal opinion,” Cavusoglu told HaberTurk TV in an interview.

The US launched its first manned airstrikes against ISIS targets from the Incirlik Air Base in Turkey Wednesday, the US military said.

Ankara is currently waging a two-pronged “anti-terror” offensive against ISIS in Syria and Kurdistan Workers’ Party (PKK) militants in northern Iraq and the southeast of Turkey, following a wave of attacks.

One Turkish soldier and seven suspected members of the outlawed PKK were killed in new violence blamed on the Kurdish rebels, the army said Thursday.

The deaths were the latest in an escalating cycle of violence between Turkish security forces and Kurdish rebels that has left a 2013 cease-fire in tatters.

The soldier was killed when an explosive device laid by PKK rebels near a railway line in the Genc district of the eastern Bingol province was detonated, the army said.

PKK fighters also launched an overnight attack with guns and rockets on a command post in the town of Silopi on the border with Iraq and Syria, prompting clashes that left four militants dead, an army statement said.

The PKK also attacked a military base and police station in Agri province near the Iranian border overnight, with three militants killed in clashes with the security forces, it said.

But the pro-PKK Firat news agency said two of those killed in Agri were teenagers aged 15 and 16 who were working at a bakery when Turkish security forces opened fire on nearby buildings.

Speaking to Firat news, pro-Kurdish Peoples’ Democracy Party (HDP) lawmaker Dirayet Tasdemir described the incident as a “clear execution.” Details of the incident could not be independently verified.

Most of Ankara’s airstrikes thus far have overwhelmingly concentrated on the separatist Kurdish rebels, who have responded by waging a bloody campaign against the security forces.According to an AFP toll, 31 members of the security forces have been killed in violence linked to the PKK since the crisis began last month.

“The likelihood of going to [elections] has increased. In fact, it has become the only option,” Davutoglu said after the talks that lasted less than two hours. He did not say when the elections could be held but said a date should be set “at the closest time possible.”

Davutoglu’s Islamic-rooted ruling AK Party lost its majority in June elections, forcing it to seek a coalition to remain in power. The deadline for forming a government is the end of next week.

The prime minister could still turn to the nationalist party for a partnership, but that party’s leader has ruled out joining any party in a coalition.

Another option is for the AK Party to form a minority government but that requires the support of another party in a vote of confidence.