You are here: Home / MidEastGulf / Turkey will go ahead with military operations in Iraq: Foreign Ministry 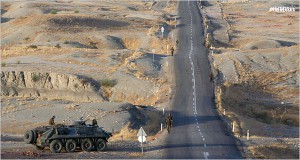 Speaking at a press conference on Sept. 15, the spokesperson did not elaborate on if Turkey informed Baghdad ahead of operations, saying he did not know.

Al-Jafari said Sept. 12 he had summoned the Turkish ambassador last week to object to what he called a violation of Iraqi sovereignty.

A spokesman for the Turkish Foreign Ministry was not immediately available for comment.

Jafari told Reuters Ankara has not coordinated with Iraq in the campaign, which Baghdad claims included an incursion into Iraq last week by Turkish special forces in pursuit of PKK militants.

“We are for the security of Turkey. Turkey has the right to defend itself,” he said ahead of an Arab League conference in Cairo. “But there must be coordination on the ground with the Iraqi government and Iraqi armed forces.”