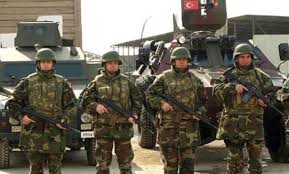 Turkey has warned the United States and Russia it will not tolerate Kurdish territorial gains by Kurdish militia of Syrian Kurdistan close to its frontiers in north-western Syria, two senior officials said.

“This is clear cut for us and there is no joking about it,” one official said of the possibility of Syrian Kurdish militia crossing the Euphrates to extend control along Turkish borders from Iraq’s Kurdistan region towards the Mediterranean coast.

Turkey fears advances by Kurdish YPG militia, backed by its PYD political wing, on the Syrian side of its 900 km (560-mile) border will fuel separatist ambitions among Kurds in its own southeastern territories. But Washington has supported YPG fighters as an effective force in combating Islamic State.

“The PYD has been getting closer with both the United States and Russia of late. We view the PYD as a terrorist group and we want all countries to consider the consequences of their cooperation,” one of the Turkish officials said.

Turkey suspects Russia, which launched air strikes in Syria two weeks ago, has also been lending support to the YPG and PYD.

“With support from Russia, the PYD is trying to capture land between Jarablus and Azaz, going west of the Euphrates. We will never accept this,” the official said.
He said Turkey had raised its concerns at high level meetings with the U.S., European Union and Russia.

The officials did not say what action, if any, Turkey might take if YPG forces crossed the Euphrates. Ankara has carried out air strikes against Turkish Kurdistan Workers Party (PKK) rebels based in the mountains of Iraqi Kurdistan; but attacks on Kurds in Syria would be far riskier, bringing Ankara into possible conflict both with U.S. and Russian air forces.

The YPG said on Monday it had joined forces with Arab rebels and that their new alliance has been promised fresh weapon supplies by the United States for an assault on Islamic State forces in what is effectively their capital, Raqqa.

Amnesty International on Tuesday accused the YPG, which has seized swathes of northern Syria from Islamic State this year, of committing war crimes by driving out thousands of non-Kurdish civilians and destroying their homes.

The Kurds, who have emerged as the U.S.-led coalition’s most capable partner in Syria against Islamic State on the ground, deny such accusations. They say those who left areas they seized did so to escape fighting and are welcome to return.

Since it was established in 1984 the PKK has been fighting the Turkish state, which still denies the constitutional existence of Kurds, with the aim of creating an independent Kurdish state.

In the 1990s, the PKK limited its demands to establish an autonomous Kurdish region and more cultural rights for ethnic Kurds,who make up around 22.5 million of the country’s 75-million population but have long been denied basic political and cultural rights, its goal to political autonomy. A large Turkey’s Kurdish community openly sympathise with PKK rebels. Over 40,000 people have been killed int the fighting.

The PKK on Saturday declared a ceasefire and pledging to suspend all offensive actions ahead of November polls.