You are here: Home / MidEastGulf / Turkey wants to involve NATO in the Syrian War 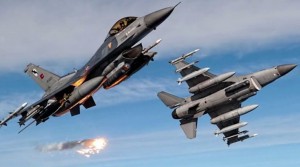 NATO head Jens Stoltenberg will meet Turkish Foreign Minister Feridun Sinirlioglu today to discuss the situation in Syria, the alliance said, after Ankara intercepted a Russian fighter in its airspace.

“The meeting will focus on the events of the last weekend and the situation in Syria,” a NATO official said, adding that the talks were called at Turkey’s request.

Turkish President Recep Tayyip Erdogan is meanwhile in Brussels today for talks with top EU officials dominated by the migrant crisis and the deepening conflict in Syria where he has backed rebels seeking the ouster of long-time Russian ally President Bashar al-Assad.

Turkey warned that if there is any repeat intrusion, Russia “will be responsible for any undesired incident that may occur.”

President Erdogan says Russia’s bombing campaign in Syria is “unacceptable” and has warned Moscow it is making a “grave mistake.”

NATO has stationed Patriot missiles on Turkey’s southern border with Syria to prevent any spillover from a bitter conflict which has left 250,000 dead and sparked a mass exodus of migrants seeking safety in Europe.