You are here: Home / MidEastGulf / Turkey wants a piece of the pie in Mosul 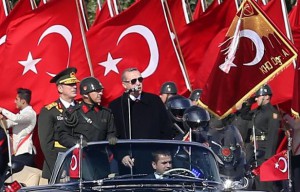 On the heels of its failure to secure a safe zone in northern Syria, the Turkish deployment in Iraq signals a struggle to maintain regional influence.

After years of building relations with former Nineveh Governor Atheel Nujaifi, who was replaced by Baghdad, Turkey lost its influence in Mosul when the Islamic State captured the city in June 2014. Now Turkey is planning to fill the vacuum by trying to insert itself in future operations against the Islamic State in Mosul.

On 4 December, 150 Turkish soldiers equipped with heavy weapons arrived in Bashiqa on the outskirts of ISIS-held Nineveh, most likely approved by the Iraqi Kurdish government.

Turkey said that 25 tanks and 150 soldiers were stationed to protect Turkish servicemen.
The move led to fierce protests by Baghdad and was opposed by the Iranian government and the leaders of Iraq’s Shiite Popular Mobilization Units (PMU), and the Kurdistan Workers’ Party (PKK) that is fighting the Turkish army in Turkey’s mainly Kurdish southeast.

“We tell the Turks: you are not stronger than the Americans. The Americans left under pressure, and you too shall leave under pressure. And if you bring tanks, we will break these tanks on your heads,” said Hadi al-Ameri, a top leader of the PMU units in Iraq in a press conference.

The Turkish government withdrew its forces from the camp near Mosul on Monday to the Turkish military base in Bamarni, Duhok Governorate, following Iraqi protests. But they didn’t leave Iraqi soil.

“Peshmerga received training from the Turkish army in Duhok, Erbil and Diana, too,” said Aydin Selcen, who served as Turkey’s consul general in Erbil, Iraqi Kurdistan. “Whereas in Bashiqa, 20 km north of Mosul, around 80 Turkish Special Forces personnel trained mostly Sunni Arab but also some Turkmen and Peshmerga units for over a year.”

“A 400-strong commando detachment supported by 25 M-60 A3 tanks brought the number of Turkish military personnel at that camp up to about 600,” he added. “Not sufficient for offensive action, perhaps, yet proof enough that Turkey thus unilaterally acted to turn the temporary training camp in Bashiqa into a permanent military forward base.”

“Even if apparently half of that military presence in Bashiqa is by now pulled back to somewhere in Duhok, I still see it as a political statement rather than a military game changer.”

The move by Turkey in Iraq was also a response to the Russian intervention in Syria that ended Turkey’s plans for a safe zone in northern Syria, and could endanger future Turkish influence in Idlib and Aleppo.

After Turkey downed a Russian SU-24 jet on 24 November, Russia hit back by bombing convoys and border traffic at Azaz and the Bab al-Salama border crossing, further weakening Turkish-backed rebels. Iraq was one of the few countries left in which Turkey could expand its influence.

The move by the Turkish army raised Iraqi fears of Turkish irredentism in Nineveh, since Turkey used to consider the oil-rich region as part of Turkey according to the National Pact. But Turkey lost Mosul in 1926 when the British wanted to include it as part of Iraq.

“Turkey wants to fill the vacuum and gain a seat in Iraq by gaining influence in the Mosul liberation operation and project power in Iraq, after they have lost power elsewhere,” an Iraqi official source said on the condition of anonymity.

Following the Turkish deployment, Kurdish President Barzani was welcomed with a Kurdish flag in Ankara on 9 December by Turkish officials. On previous Barzani visits to Turkey, the Kurdish flag was absent.

The Islamic Republic News Agency, in an article on Barzani’s visit, insulted Barzani, calling him “a guy in Kurdish clothes,” referring to Barzani’s visit to the United Arab Emirates, Saudi Arabia, and Turkey as “controversial,” and questioning Barzani’s presidential position. The comments sparked outrage among Kurds, and the article was later deleted.

The Iraqi government has grown closely allied to Teheran following ISIS’s advance in 2014 and amidst the Syrian civil war.

“By becoming so closely allied with Tehran, Baghdad has pushed Ankara and Erbil together, threatening, in my view, the very unity of the country,” said Feisal Istrabadi, former Iraqi ambassador to the UN and director of the Center for the Middle East at Indiana University.

“There are obviously other pressures on the country’s unity, unrelated to Turkey, but Baghdad has in effect been inducing closer relations between Turkey and the KRG — a dangerous game for a Baghdad government that ostensibly is defending the unity and integrity of Iraq,” he said.

“On the other hand, Turkey has been playing a duplicitous role on ISIL, and its behavior is far out of all proportion to its size.”

Abdullah Hawez, a Kurdish journalist based in Erbil, thinks the Turkish troop deployment is the beginning of a new change in Turkish policy.

“Turkey’s new policy is more interventionist and firm. Mosul, unlike places like Ramadi and Tikrit, is extremely important for Turkey because the city is considered within Turkey’s sphere of influence,” he said. “Therefore Turkey does not want Iran to have any hand in retaking the city.”

“Turkey’s involvement in the Mosul operations are mostly aimed at preventing Iran from being involved in the offensive on the city. And the reason Iran and Baghdad are against it is because the whole aim of Turkish troop deployment is countering Iran’s influence, so of course Iran would be against it.”

The Turkish move will most likely have political ramifications for Turkish-Iraqi relations, and improve relations between the KRG and Turkey. “The KRG hosts Turkish troops and also gets training and support from Turkey,” Hawez said.

“It may also push the Iraqi government closer to Iran and Russia since the US is likely not going to stand against Turkey because they are both NATO members,” he added.

Although Turkish troops have withdrawn from Bashiqa, on Tuesday the Iraqi Council of Ministers and Iraqi PM Haider al-Abadi renewed their call on Turkey to “respond to the request from Iraq for full withdrawal from Iraqi territory and respect for national sovereignty.”

But Turkey says the presence of Turkish troops does not pose a threat to Iraqi sovereignty.
Meanwhile, Turkish Prime Minister Ahmet Davutoglu was quoted by TRT on Tuesday as saying: “We defend Iraq’s territorial integrity more than anyone. Similarly, Turkey has an unquestionable principle in terms of the fight against terrorism.”