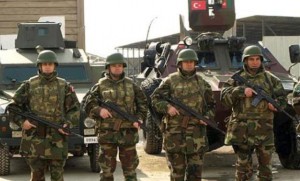 Turkey’s parliament has voted to extend for another year a mandate that allows the military to combat Islamist jihadists and Kurdish militants in neighbouring Syria and Iraq, as the country battles its biggest ever security crisis.

The parliament convened for an extraordinary session yesterday, during which the new members of the power-sharing government also took their oaths, to discuss the current mandate which expires on October 2.

The mandate allows the use of the armed forces in neighbouring Syria and Iraq as well as for foreign forces to transit Turkish territory in operations against Islamic State (IS) jihadists.

The terms of the mandate also permit US air forces to use Turkey’s Incirlik air base to make lethal strikes against IS jihadists in Syria, which have now commenced after months of negotiations.

The motion had been submitted to parliament last week by the ruling Justice and Development Party (AKP) which cited “increased risks and threats against Turkey’s national security along the southern borders.”

Ankara in late July launched a dual anti-terror offensive against IS militants in Syria and the outlawed Kurdistan Workers’ Party (PKK) in northern Iraq and southeast Turkey, following a series of deadly attacks.

But its involvement in the battle against IS fighters had been limited as it focused on an air and ground campaign against the Kurdish PKK separatists, who have responded by tearing up a 2013 ceasefire and staging daily attacks against the security forces.

The Pro-Kurdish Peoples’ Democratic Party (HDP) voted against the extension of the mandate.

But the main opposition Republican People’s Party (CHP) and the Nationalist Movement Party (MHP) voted in favour, meaning the AKP’s motion passed with a simple show of hands.

Prime Minister Ahmet Davutoglu formed a so-called “election cabinet” last week which includes the first ever representatives from the HDP, which entered parliament for the first time in June after winning 13 per cent of the vote.