You are here: Home / MidEastGulf / Turkey: US replaces F-16s with A-10 Thunderbolt ground bombers 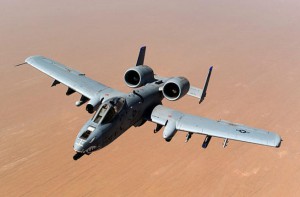 The US has replaced six F-16s positioned at an airbase in southern Turkey with a dozen ground bombers, a Pentagon official told Anadolu Agency on Tuesday.

“On Oct. 20, airmen and 12 A-10 Thunderbolt IIs from the 75th fighter squadron from Moody AFB, Georgia, arrived at Incirlik Air Base, Turkey, where they will operate in support of Operation Inherent Resolve,” according to the defense official who spoke on condition of anonymity.

“The A-10s repositioned from an undisclosed location in the CENTCOM area of operations,” the official said.

Turkey opened the Incirlik Air Base in August and began strikes on Daesh targets inside Syria in late August after Turkey and the US finalized a deal on Turkey’s involvement in air operations against the militant group.

“Turkey is a NATO ally, close friend of the United States and an important partner in the international Coalition against ISIL,” the official said. “The use of Turkish bases for US strike and supporting aircraft has been a very important force multiplier.”

The A-10 Thunderbolt II is coveted for its agility at “low air speeds and altitude” and “is a highly accurate and survivable weapons-delivery platform”.

It can fly over battlefields “for extended periods of time and operate in low ceiling and visibility conditions”, according to the US military.