You are here: Home / MidEastGulf / Turkey urges NATO to keep up its Patriot defenses 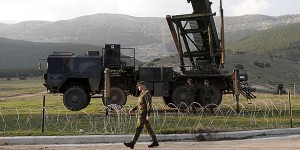 Turkey appealed to its NATO allies on Thursday to shore up missile defenses in the country aimed at shooting down Syrian rockets, as Germany said again that it will withdraw its Patriot batteries and the United States was set to do the same.

NATO is now waiting for other nations to plug those gaps.

While NATO’s secretary-general, Jens Stoltenberg, said he was prepared to send ground forces to defend Turkey, the situation raised questions about NATO’s strategy in the country, which shares a border with both Syria and Iraq.

Germany’s defense minister said Berlin would go ahead with plans to switch off its Patriot batteries in Turkey next week and withdraw most of the soldiers operating them before Christmas. All soldiers and materiel are due to be withdrawn by the end of January.

“This decision [to withdraw the Patriots] is right,” Ursula von der Leyen said as she arrived for the meeting.

“The question is what danger can be warded off in which way,” she said. The comments appeared to suggest that the Turkish air force is capable of intercepting fighter jets.

Backing up that suggestion and acknowledging that there were discussions about ways to reassure Turkey and deter Russia, Stoltenberg told journalists after the morning session: “What we now see is other kinds of challenges. But again, we are discussing with different allies, with Turkey, how and in what format we can support them.”

As Russian and US planes fly combat missions over the same country for the first time since World War Two, NATO is eager to avoid any international escalation of the Syrian conflict that has unexpectedly turned the alliance’s attention away from Ukraine following Russia’s annexation of Crimea last year.

NATO deployed its Patriot missiles in January 2013 in Turkey and Spain now has batteries in place to confront ballistic missiles launched by Syria’s President Bashar al-Assad.

The United States will withdraw its Patriot deployment any day for modernization. France and Italy are understood to be willing to join Spain, but no decision has been taken, people familiar with the discussion say.

Spain’s Defense Minister Pedro Morenes said this week that although he was concerned by Russia’s incursion into Turkish airspace, his nation’s Patriots were deployed to defend “against attacks with missiles coming from Syria”.

Since 2012, NATO has detected several hundred ballistic missile launches with Syria, emphasising what it sees as the need for an effective defense of Turkey.

Officials at the US-led alliance are still smarting from Russia’s weekend incursions into Turkey’s airspace near northern Syria. In public comments, Stoltenberg says the alliance’s support of its 28 allies is unwavering.

“NATO is ready and able to defend all allies, including Turkey against any threats,” he said as he arrived for the meeting.

“NATO has already responded by increasing our capacity, our ability, our preparedness to deploy forces including to the south, including in Turkey,” he said, noting that Russia’s air and cruise missile strikes were “reasons for concern”.

The incursions of two Russian fighters in Turkish airspace on Saturday and Sunday has brought the Syria conflict right up to NATO’s borders, testing the alliance’s ability to deter a newly assertive Russia without seeking direct confrontation.

While the United States has ruled out military cooperation with Russia in Syria, NATO defense ministers will discuss how to encourage Russia to help resolve the crisis, betting that Moscow also wants to avoid being bogged down in a long conflict.

For 40 years, NATO’s central task was deterring Russia in the east during the Cold War, but now, after a decade-long involvement in Afghanistan, the alliance is facing a reality-check close to home, with multiple threats near its borders.

Divisions between eastern NATO members, who want to keep the focus on the Ukraine crisis, and others who fret about Islamic State of Iraq and the Levant (ISIL) militants, risk hampering a unified response from the 28-nation North Atlantic alliance.

France and Britain, NATO’s two main European powers, are understood to be willing to see the alliance use its new 5,000-strong rapid reaction force beyond NATO borders, potentially helping stabilize post-conflict governments in Libya or Syria.

Others nations, including Poland and the Baltics, want a permanent NATO presence on their territory to act as a credible deterrent to any further effort by Russian President Vladimir Putin to gain influence in former Soviet states.