You are here: Home / MidEastGulf / Turkey threatens ‘whatever necessary’ to combat Kurdish autonomy in Syrian Kurdistan 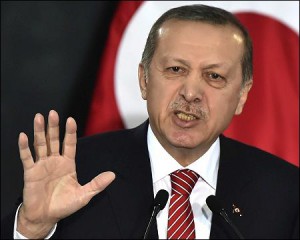 Threatening continued assaults on the Kurdish militia in Syrian Kurdistan, the Turkish president has warned he will not request anyone’s permission to do whatever is necessary to prevent the spread of support for Kurdish autonomy, even if it requires bombing US-allied rebels.

In a clear message to dissuade Kurds from supporting the self-declared autonomous town of Gire Spi (Tel Abyad) near the Turkish border, President Tayyip Erdogan said that he will “do what is necessary,” including using force, to eradicate the potential source of separatism along its borders.

Gire Spi, on the border with Turkey, was liberated in June from Islamic State (IS, formerly ISIS/ISIL) by Kurdish People’s Protection Units (YPG) fighters with the help of American-led air strikes.

Last week, a local council led by the Democratic Union Party (PYD) declared it part of the system of autonomous self-government established by the Kurds. Since the conflict in Syria broke out in 2011, Syrian Kurds have declared three autonomous zones, called “cantons,” across Syrian Kurdistan (northern Syria), but deny that they are aiming to establish their own state.

Alarmed by Kurdish territorial gains, Turkey fears that the latest creation of autonomous Gire Spi canton could stir separatism among its own Kurdish minority. YPG has been a key ally of the US in the fight against Islamic State in Syria, but Erdogan’s message sends out a clear sign that Turkey’s national interests supersedes those of the United States and NATO.

“We are determined to [combat] anything that threatens us along the Syrian border, inside or out,” Turkish President told Kanal 24 television station on Wednesday.

“If the Kurds withdraw and don’t form a canton, there’s no problem. But if the mindset continues, then what is necessary will be done or we face serious problems,” Erdogan said.

The Turkish President also accused Washington of double standards and claimed that the PYD allegedly carried out ethnic cleansing of Arabs and Turkmen in Northern Syria, equating US support for the Kurdish militias to aiding terrorism.

“They don’t even accept the PYD as a terrorist organization. What kind of nonsense is this?” he said. “The West still has the mentality of ‘my terrorist is good, yours is bad,’” Erdogan said.

Turkey has for the past three decades been trying to end an insurgency by Kurdistan Workers Party (PKK) fighters. PKK is classified as a terrorist organization by the United States and EU, but its image has improved in the West as its sister party in Syrian Kurdistan has been at the forefront of the fight against the Islamic State.

Erdogan said 1,400 PKK militants were fighting alongside the YPG in Syrian Kurdistan.

Ankara confirmed on Monday that it had already conducted two strikes on Kurdish forces in Syria as a “warning.”

“This was a warning. Pull yourself together,” Erdogan said. “If you try to do this elsewhere – Turkey doesn’t need permission from anyone – we will do what is necessary.”

With Kurds making up around 22.5 million of the Turkey’s 75-million population, its ultimate nightmare would be Turkish Kurds cooperating with their Syrian brethren in search of autonomy on both sides.

Turkey still denies the constitutional existence of its own Kurds.