You are here: Home / MidEastGulf / Turkey shooting down a Russian warplane but Russia and the West have many reasons to avoid conflict 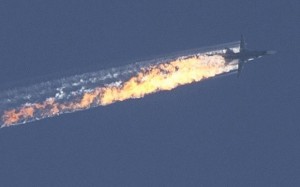 The apparent downing of a Russian fighter jet by Turkey – which Ankara claims was violating its airspace, despite ten warnings – is an exceptionally dangerous moment in Syria’s four-year civil war.

But, in the context of warming diplomatic relations with Moscow and the extraordinary risks of escalation, Turkey’s Western allies are likelier to proceed with extreme caution.

A crisis like this was almost inevitable. Turkey had complained of repeated airspace violations by Russian aircraft in early October, prompting Nato to issue a protest. Later that month, Turkey did indeed shoot down what, for one heart-stopping moment, seemed to have been a Russian fighter aircraft – but turned out to have been a probable Russian drone.

With Russia, Syrian, American, French, British, Canadian, and Arab aircraft filling Syria’s crowded skies, Russian aircraft coming with 500 feet of American planes, and Russia repeating some of its border-probing behaviour seen over the last year or two in Europe, a crisis was always liable to erupt. The US and Russia had agreed safety protocols in late October, including a ground communication line for round-the-clock contact, but this wouldn’t have applied to Russia-Turkey interactions.

It is crucial to keep a sense of perspective. This would not be the first time that Russian aircraft have been shot down by American-made planes, or vice versa, without sparking Word War 3.

Pakistan’s American-made F-16s shot down a slew of Soviet aircraft in the late 1980s, during the latter’s war in Afghanistan. Going back further, a US Army RU-8 Seminole flying from Turkey was downed over Armenia, then Soviet territory. The most famous incident is of course the downing of CIA pilot Gary Powers’ U2 spy plane in 1962. Soviet pilots also played an important covert role during the Korean War between 1950 and 1953, with Russian sources claiming that they shot down 1,100 to 1,300 American aircraft.

However, this is the first time since the end of the Cold War that a Nato member has downed a Russian warplane.

Although Turkey will insist that it was within its rights to shoot down a plane in its airspace, after the past month’s repeated incidents, its alliance partners in Nato will want to focus on de-escalation. Relations between the West and Russia had thawed slightly, though it would be premature to speak of a rapprochement.

In the aftermath of the Paris attacks, French President Francois Hollande announced his intention to meet Russian President Vladimir Putin with the intention of forming “one big coalition”. US President Barack Obama met with Putin himself with noticeably warmer body language, and the UN Security Council has passed a resolution sanctioning “all necessary means” to eradicate Isil (though, lacking in so-called Chapter VII authority, this was largely a political gesture).

Talks in Vienna have also resulted in modest progress towards a peace deal for Syria. While Nato will surely release another note of protest over the apparent intrusion into Turkish airspace, Turkey’s Western allies will be wary of jeopardising what they see as these diplomatic gains by pressuring Russia too strongly.

What will Russia do now? Like any leader, Mr Putin will be under pressure to respond. But it is possible that Moscow’s adamant claim that its aircraft was in Syrian airspace – despite Turkey’s statement to the contrary, and supporting evidence from radar – will allow for a face-saving compromise, whereby Putin directs his ire at Syrian rebels rather than towards Turkey. The Kremlin mouthpiece Russia Today has likewise insisted that the jet was brought down from the ground. Paradoxically, this might have a calming effect.

Much will surely depend on the fate of Russia’s two pilots, one of whom was reported to be in Turkmen hands while another other, according to images circulated on social media, appears to have died.

Turkey’s government has close ties to Turkmen communities and rebels in northern Syria – only yesterday Ankara had called for a UN Security Council meeting to discuss escalating Russian and Syrian attacks on Syrian Turkmen – and could, perhaps, use this longstanding leverage to secure the release of the pilots or their bodies.

On the other hand, Turkey’s President Recep Tayyip Erdoğan might well ask why he should lend such assistance to a country that continues to probe his airspace with impunity, merely to shield a Syrian diplomatic process that he, one of Assad’s bitterest opponents, views with scepticism.

Moscow and Ankara are likely to avoid a spiral into conflict over this incident. But the underlying cause will remain, and such episodes will repeat themselves unless Russia realises that brinksmanship on Nato’s borders is a reckless, dangerous game.

The Middle East is bringing the world’s Great Powers into their closest proximity since Kosovo War in 1999, and in a far more dangerous way. The Syrian war is not only generating vast refugee flows and incubating the world’s most potent terrorist group; it is also a cockpit of traditional state-on-state international rivalries.