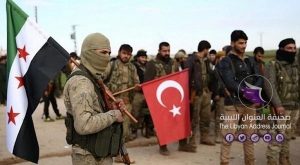 Pro-Turkey Syrian mercenaries continue to arrive in Libya, while the death toll in their ranks as a result of military operations in the Libyan territories has reached about 459 fighters, according to the Syrian Observatory for Human Rights.

The number of recruits who were sent to Libya so far has reached about 15,300 Syrian mercenaries, of whom about 5,250 have returned to Syria, while Turkey continues to bring more faction elements to its camps for training.

According to the Syrian Observatory, among these mercenaries are about 300 children, aged between 14 and 18 years, the majority of whom are from the “Sultan Murad” division. They were recruited to fight in Libya for about two thousand US dollars a month.

There are also 400 other mercenaries who have used Libya as a platform to reach Europe, and entered Europe illegally through Italy, according to the observatory.