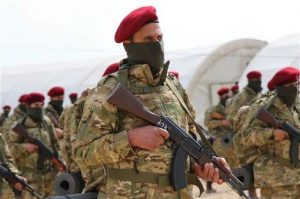 Trained, equipped and clothed by Turkey, a Kurdish fighting force has been deployed to the northern Syrian Afrin region to fight alongside Turkish forces, in an attempt by Ankara to counter impressions that the Turkish offensive is anti-Kurd and possibly to aid in the looming urban battle, like reported by middleeasteye.net.

Images in local media showed the battalion at a graduation parade marking the completion of their special forces training.

Turkey launched an open-ended military offensive into Afrin in late January. It aims to clear its border area of what it says is a threat to its national security by the Syrian-Kurdish PYD and its YPG militia.

Turkey considers the PYD/YPG as the Syrian extension of its the Kurdistan Workers’ Party (PKK) group, which it has been in conflict with since 1984 and lists as a terrorist entity.

Ankara has said it intends to wipe out the entire PYD/YPG presence from the Afrin region and not just the area on its border. This will require an urban offensive into the town centre.

While no recent census information is available, there were more than 30,000 people residing in Afrin centre in 2012 during the early days of Syria’s war.

A large number of refugees from within Syria are believed to have added to the town’s population as they sought refuge in the then relatively peaceful Afrin.

Apart from military engagement, the new battalion would ostensibly also provide valuable language assistance in the event of an urban assault.

“We are the Kurds of the Azaz region. We are members of the Hamza brigade. God willing, we will reach Afrin. God willing, we will deliver out people from PKK cruelty in Afrin,” Hasan Abdullah Kulli, the commander of the Kurdish Falcons battalion, was quotes as saying at the graduation ceremony.

Turkish officials have strongly rejected concerns over civilian casualties voiced by others actors present in the field and by other countries, saying they take the utmost care to ensure there is no such collateral damage. They claim such allegations are sheer propaganda aimed to undermine Turkey’s resolve.

Turkish officials have also been keen to stress that their military offensive in Afrin, like their fight with the PKK, is not against Kurds in general but specifically targets the PYD7YPG.

They hope the deployment of the Kurdish Falcons battalion in their ranks will help prove that as well.

The village guards are ethnic Kurds from villages in south-eastern Turkey who are lightly armed and given a monthly stipend to act as a first line of defence in the face of PKK attacks.

Afrin and its town centre are majority-Kurdish populated and Turkish troops and the mainly Arabic speaking FSA force would need language assistance if they enter the town centre.

To date various sides involved in the clashes in the Afrin region have provided differing statistics regarding casualties, both civilian and military.

Separately, Turkish Prime Minister Binali Yildirim over the weekend said around 350,000 people from Afrin had sought refuge in Turkey.

He didn’t expand on whether they had come after the offensive was launched or were part of the influx of more than three million Syrians to have sought refuge in Turkey since the outbreak of the Syrian war.

Ankara has also said the month-long Syria ceasefire agreed at the UN security council does not apply to its Afrin offensive. Media reports stated that Turkish troops continued to encircle Afrin and prepare for an urban assault on the town centre.