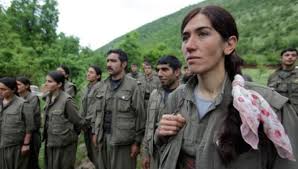 Turkey views a unilateral cease-fire by Kurdish militant group PKK as an “important step,” though it won’t be enough to end the fighting in the country’s southeast, interim Deputy Prime Minister Numan Kurtulmus said.

The PKK “must bury arms and convince people that it will not take up arms again,” Kurtulmus said in a televised press conference late Monday in Ankara.

The Kurdistan Workers’ Party or PKK, which has killed dozens of Turkish soldiers and policemen in recent months, said Oct. 10 it would halt its attacks but would retaliate if it was targeted. Turkish airstrikes killed 12 PKK militants in Hakkari province on Monday, the military said in a statement on Tuesday. PKK militants killed a Turkish soldier during a military offensive in Sirnak province, also on Monday.

The peace process between the government and the PKK ended after June’s inconclusive general election, which gave the pro-Kurdish HDP parliamentary representation for the first time and ended the ruling AK Party’s 13-year majority. Violence has intensified, especially in the predominantly Kurdish southeast, ahead of a repeat poll next month.

“The future of the Kurdish conflict depends on the outcome of Nov. 1 elections,” Nihat Ali Ozcan, who studies the issue at the Economic Policy Research Foundation in Ankara, said by phone on Tuesday. “A coalition between AKP and the nationalist MHP would definitely fuel clashes, deepening domestic unrest and scaring away investors.”

Turkey’s MHP opposes any concessions to the minority Kurds, and wants the government to abandon efforts to end through dialog the PKK’s three-decade struggle for autonomy.

Recent opinion polls point to another hung parliament after November’s election, with a twin suicide-bombing ahead of a peace rally in Ankara on Oct. 10 further complicating the political landscape.

The attack left at least 97 people dead, and while no one has claimed responsibility, authorities initially listed the PKK, as well as Islamic State, as potential suspects — even though many of those killed were Kurdish activists.

Interim Prime Minister Ahmet Davutoglu said Monday that Islamic State was the primary suspect. Kurtulmus said the attack had similarities, including the type of explosives used, with a suicide bombing in Suruc on July 20 that is also believed to have been carried out by the militant group.

That announcement has done little to diffuse the tension between the government and Kurdish groups. President Recep Tayyip Erdogan and Davutoglu have repeatedly accused the HDP of links to the PKK, a charge that HDP leader Selahattin Demirtas has called a smear campaign ahead of the November poll.

Faysal Sariyildiz, a Kurdish HDP lawmaker, accused the AK Party of failing to take security measures at the Ankara rally, which came as Kurdish forces in Syria were said to be preparing to attack Islamic State’s self-declared capital, Raqqa.

“We’ve buried hundreds of Turkish Kurds who have fallen in the fight against Islamic State in Syria,” Sariyildiz said by phone from the southeastern town of Dargecit on Tuesday. “And yet, the Turkish government still regards the Kurds as the enemy, while allowing Islamic State to carry out such a horrendous attack in the heart of the Turkish capital.”

The distrust is such that many Turks suspect pro-government forces of playing a part in the Ankara bombings, “to scare voters into supporting Erdogan’s law-and-order, security-first platform,” Wolfango Piccoli, managing director of Teneo Intelligence in London, said in a note on Monday.

“Once the initial shock has subsided, the attack will further exacerbate the deep cleavages in a deeply divided society,” he said.