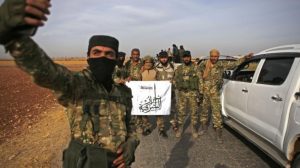 Turkey has stepped up its military involvement in Libya and will resume sending mercenaries to Libya, like reported by aawsat.com.

Reliable sources informed the Syrian Observatory for Human Rights (SOHR) that Ankara intends to send a new batch of Syrian fighters to Libya in the next few days, despite the ongoing negotiations for a political solution after the agreement on the ceasefire between Libyan parties.

The Observatory reported that the return of Turkish-backed Syrian mercenaries has been suspended for over 20 days, since the latest batch arrived in Syria in mid-November.

SOHR reported that about 18,000 Syrian mercenaries arrived in Libya, including 350 children under the age of 18, of whom 10,750 returned to Syria after completing the duration of their contracts and receiving their salaries.

The number of extremists transported from Syria to Libya has reached 10,000, including 2,500 Tunisians, to support the Government of National Accord (GNA) headed by Fayez al-Sarraj.

The Observatory indicated that 496 Syrians have been killed in Libya.

Meanwhile, GNA considered the memorandum of understanding (MoU) on security and military cooperation signed with Turkey on November 27, 2019, “legitimate and in compliance with international laws.”

GNA Ministry of Foreign Affairs spokesman Mohammed el-Geblawi told Anadolu Agency that the MoU is not similar to the support Libyan National Army chief Khalifa Haftar receives from many countries.

Geblawi was referring to the recent statement of UN Acting Special Representative Stephanie Williams on foreign presence in the country.

During the third virtual meeting of the second round of the Libyan Political Dialogue Forum (LPDF), Williams said that the foreigners are not guests, but are now “occupying” the country, adding that the 20,000 foreign fighters and mercenaries are causing a “serious crisis.”

Geblawi said the remarks are not acceptable and should be supported by infallible evidence.

On mercenaries and the flow of weapons, he asserted that Haftar was the first to take such illegal actions that violate UN Security Council resolutions.

Geblawi reiterated that agreements and MoUs with friendly countries, such as the one signed with Turkey, are a legitimate Libyan matter.