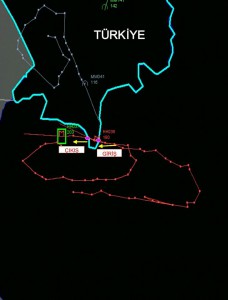 Turkish fighter jets shot down a Russian warplane near the Syrian border on Tuesday after allegedly repeated warnings over air space violations, but Moscow said it could prove the jet had not left Syrian air space.
A Kremlin spokesman said it was a “very serious incident” but that it was too early to draw conclusions.
Russia’s defence ministry said one of its Su-24 fighter jets had been downed in Syria and that, according to preliminary information, the pilots were able to eject. It said the aircraft had been over Syria for the duration of its flight.
Although the pilots were able to eject but footage released by armed Syrian opposition group show the dead body of one pilot.

The Turkish military said the aircraft had been warned 10 times in the space of five minutes about violating Turkish airspace. Officials said a second plane had also approached the border and been warned.

A radar trail map of the downed plane released by Turkish military showed an unknown location on the Syrian border where the plane was said to have entered and left Turkish airspace.