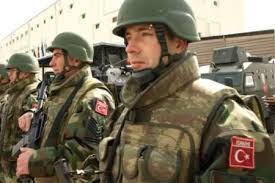 Turkish Prime Minister Ahmet Davutoğlu has said his country may take part in a possible ground operation targeting the Islamic State of Iraq and the Levant (ISIL) as part of what he called “an integrated strategy” by the US-led coalition fighting the organization.

“A ground force is something which we have to talk [about] together,” he said. “There’s a need of an integrated strategy including air campaign and ground troops. But Turkey alone cannot take all this burden. If there is a coalition and a very well designed integrated strategy, Turkey is ready to take part in all senses,” Davutoğlu said during an interview with CNN International’s Christiane Amanpour on Monday night.

Otherwise, Davutoğlu continued, just carrying out a ground operation against ISIL but continuing to have a power vacuum on the ground would lead to the emergence of another terrorist group in Syria instead of ISIL. “We have to solve the Syrian crisis in a comprehensive manner,” he added.

Saying that Turkey has already been conducting aerial attacks targeting ISIL positions as part of the coalition, Davutoğlu said, “But, it is not enough.”

When asked by Amanpour whether the precondition of Turkey getting more involved in the anti-ISIL efforts is an agreement by the coalition to work against Syrian President Bashar Assad, Davutoğlu said yes. “Yes, and against all groups and regimes creating this [power] vacuum,” he said.

Turkey vowed to take a more active role in combating ISIL in July, as part of a multi-pronged offensive which also saw them ramp up attacks on militants from the outlawed Kurdistan Workers’ Party (PKK).

Since then, the Turkish military has primarily concentrated on hitting its old foe, the PKK, although Turkish air bases have also been used by US-led coalition jets to hit ISIL targets in northern Syria.

The Turkish government is pressing for a no-fly and buffer zone inside Syria to defend itself in the face of the clashes in the country, in order to prevent the conflict from spreading to its territory. These two demands have not been welcomed or approved of by US and European partners.