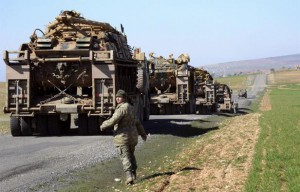 Turkey has been preparing for a large-scale military intervention in northern Syria against ISIS, according to a number of reports in the Turkish media.

Although officials have not made any concrete statements on the matter, they have alluded to an upcoming security decision regarding Turkey’s border with Syria.

Turkish FM Mevlut Cavusoglu announced that the Turkish National Security Council will meet Monday, after which he said the government “will make the necessary announcements.”

Meanwhile, Prime Minister Ahmet Davutoglu said Sunday that “our country is ready for any contingency” along the Syrian border, after a number of Turkish media outlets reported that the government was moving to deploy against ISIS in a stretch of territory from northeast of Aleppo to west of Kobane.

Yeni Safak, a paper close to the ruling Justice and Development Party (AKP), said Sunday that that the Turkish Armed Forces Chiefs of Staff were preparing for a ground incursion with 18,000 troops.

“Ankara plans to establish a 110-km long and 28-km wide buffer zone stretching from Karkamış to Öncüpınar. The Turkish Armed Forces are expected to conduct a synchronous operation on both sides,” the report added.

The newspaper also said that the Turkish government made the decision after the “attempt to create an independent Kurdish entity” in northern Syria.

Kurdish People’s Protection Units (YPG) forces backed by international coalition airstrikes have made stunning advances against ISIS, rolling back the extremist group in northeastern Syria and linking two of their de-facto autonomous cantons in mid-June after the seizure of Tel Abyad.

Turkish President Recep Tayyip Erdogan on Friday warned that his country “will never allow” the establishment of a Kurdish state along its border, setting the stage for the reports that Turkey’s ground incursion would aim to preempt any further Kurdish advances against ISIS along the border.

Hurriyet, a leading Turkish daily close to Erdogan’s center-left political opponents, reported that the Turkish army was reluctant to move into Syria and was “playing for time as the country heads for a new coalition government.”

Erdogan’s AKP lost their parliamentary majority in the June 7 general elections, setting the stage for complex negotiations to attempt to form a new coalition government before an August 15 deadline.

The London-based daily said the two men were “pushing for Turkish intervention in Aleppo province, in the Jarablus area in particular, to prevent Kurdish forces from advancing further on the pretext of fighting ISIS.”

The move also intended to secure a much talked of “isolated zone and no-fly zone to support moderate Syrian opposition forces and stop the movement of more Syrian refugees towards Turkish territory.”

However, the newspaper reported, Turkish Armed Forces Chief of Staff General Necdet Ozel believes that “legitimizing Turkish intervention in Syria… would probably be a simple matter.”

“It would be enough for Ankara to confirm that it would intervene to strike ISIS to garner international support,” Ozel was cited as saying.

According to Alaraby Aljadeed the general also voiced concern that “the battle will not be easy with a group like ISIS — which is well-versed in guerilla warfare — pitted against a regular army.

“This could also expose the Turkish interior to the danger of reprisal suicide operations launched by the group.”

“Furthermore, it could put the Turkish army in direct confrontation with PYD forces; the situation inside Turkey could be re-ignited by the PKK resuming [its] war on Ankara, which has been inactive for around 3 years.”