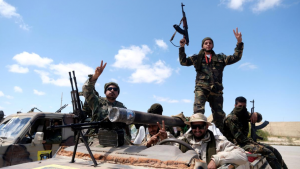 Turkey, Qatar and Libya’s Government of National Accord have agreed to grant Syrian, Somali, and Tunisian mercenaries Libyan passports and integrate them into the GNA forces under Turkish supervision, sources confirmed to Al Arabiya.

“The supervision and training under Turkey will be held within the al-Watiya airbase and Tripoli International Airport with Qatari financial support and assigning them to specific tasks, including securing and protecting government headquarters that belong to al-Wefaq (GNA) so that the government will not be blackmailed by the Libyan local militias,” one source said.

Qatar and Turkey signed an agreement on Tuesday to send military advisers and instructors for the armed forces of Libya’s GNA government.