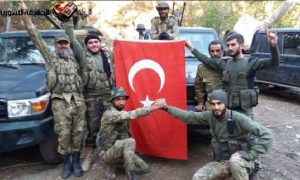 Reporting about the Syrian mercenaries transfer by Turkey to Libyan territory, the Syriab Observatory for Human Rights (SOHR) said that in recent days, Turkey has been exerting pressure on the commanders of the “National Army” factions in order to force fighters under their command to join fighting in Libya, like reported by anfenglish.com.

Citing “very reliable sources”, SOHR reported that most of the factions do not want to send their fighters to Libya anymore, especially since the fighters there are suffering from extreme harsh situation, while Turkey’s incentives remain unfulfilled.

“As Turkey’s policy changing, Turkish intelligence turned to threaten to open old cases related to scandals in which the factions’ leaders involved, unless these leaders forced their fighters to leave to Libya.”

SOHR said: “It is worth noting that the factions which are fighting in Libya are operating under the banner of the Turkish-backed “National Army”, such as “Ahrar Al-Sharqiyyah, Jaysh-Al-Sharqiyyah, Jays Al-Islam, Al-Rahman Corps, Al-Sham Corps, al-Mu’tasim Sultan Murad Division, Division, Suqur Al-Shamal Brigade, Al-Hamzat, and Suliman Shah.”

According to SOHR statistics, the number of recruits who arrived in Libya up to date, rose to nearly 8,000 mercenaries, including a group of non-Syrian mercenaries, while nearly 3,100 others arrived in Turkey to undergo training courses.