You are here: Home / MidEastGulf / Turkey PM hails strikes on IS, PKK before NATO meeting 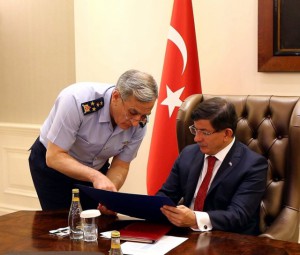 Turkish Prime Minister Ahmet Davutoglu has said “everyone should see” that a move by his country to use its force effectively can “change the game in Syria, Iraq and the entire region”.

Davutoglu‘s comments come as Ankara has called in consultations of NATO ambassadors under Article 4 of the alliance’s founding treaty.

The article allows the member states to “consult together whenever, in the opinion of any of them, the territorial integrity, political independence or security of any of the Parties is threatened”.

NATO Secretary General Jens Stoltenberg later confirmed that a meeting of ambassadors will meet for consultations on Tuesday, in a session held under Article 4 for a fifth time in the alliance’s history. Two of the four meetings so far were also initiated by Turkey, in 2003 and 2012 respectively.

The latest developments follow a suicide bombing blamed on the Islamic State (IS) group rocked the town of Suruc near the border with Syria claiming dozens of lives and leaving more than 100 wounded.

It prompted a move by Ankara to launch air strikes on IS positions in Syria, but also on the Kurdistan Workers Party (PKK) in Iraq last week, thus giving Kurdish rebels ground to claim the two-year-long ceasefire has been breached.

A series of incidents allegedly involving Kurdish militants also took place in the region roughly at that time, and the death of two soldiers after a car bombing on July 25 was also blamed on Kurdish fighters.

Hundreds of people allegedly affiliated to IS and the PKK, as well as to other Kurdish organizations deemed illegal, were detained in the past days.

“This is how we are going to act from now on,” Hürriyet Daily News quotes Davutoglu as saying and explaining the three reasons for Turkey to embark on a policy shift with regard to IS.

These are named as “a need to maintain public order and protect democracy and freedoms”, the need to counter “public security threats against Turkey“, and the importance of demonstrating Turkey‘s “deterrent power and potential to those who are calculating new scenarios in the region.”

Over the past year Ankara had often been accused of failing to act more strongly on the IS offensive south of its borders with Syria.

Meanwhile anti-government protests were held in Istanbul, Turkey’s biggest city, over the arrests, one of which had resulted in the death of an activist three days earlier.
Back in 2013, a ceasefire with the PKK triggered by President (then PM) Recep Tayyip Erdogan was labelled “historic”, but some Kurdish activists argue the government is not abiding by it anymore.