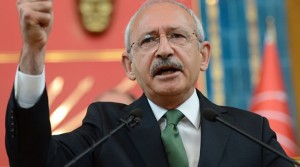 Turkish opposition leader Kemal Kilicdaroglu Wednesday accused the government of delivering arms to Islamist rebels in Syria, pledging to seal the border to such traffic if he came to power.

Turkey has been under fire for allegedly shipping arms to insurgents fighting to bring down the regime of President Bashar al-Assad – charges vehemently denied by Ankara.

“There are videos showing how cases in trucks were opened and images of bombs. I also watched them,” Kilicdaroglu of the Republican People’s Party (CHP), told the Hurriyet newspaper in an interview.

“There is nothing to hide here,” he said.

Kilicdaroglu pledged to bolster security on the Turkish-Syrian border if his CHP party came to power in June 7 general elections.

Polls show the CHP running in second place, after the ruling AKP party.

“With the CHP in power, the border would return to its former state and we would provide border security,” Kilicdaroglu said.

His comments come amid growing controversy over the arrests of dozens of soldiers, police and prosecutors over inspections of Turkish National Intelligence Organisation (MIT) vehicles bound for Syria in January 2014.

“We will not allow illegal border crossings,” Kilicdaroglu said. “And MIT trucks will not shuttle back and forth.”

Tensions over foreign policy are running high in the run-up to the election, with some top CHP figures claiming that Ankara is planning to militarily intervene in Syria as a publicity stunt ahead of the vote.

There have also been claims that Turkey and its close ally Qatar supplied arms to Al-Qaeda-linked rebels to help them take the region of Idlib from Assad’s forces earlier last month.