You are here: Home / MidEastGulf / Turkey operations against PKK over 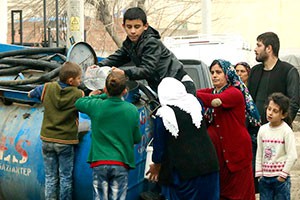 A Turkish security force campaign against Kurdish militants in the south-east has been largely completed, Prime Minister Ahmet Davutoglu was reported as saying on Tuesday, as he outlined plans to maintain tighter control in parts of the region.

Turkish police and military launched major operations against Kurdistan Workers Party (PKK) fighters in towns across the mainly Kurdish region last month, after the conflict reignited with collapse of a two-year long ceasefire in July.

The army says it killed more than 500 PKK rebels in the campaign, adding to a death toll of more than 40,000 people killed since the PKK took up arms in 1984. The pro-Kurdish HDP party says some 100 civilians have been killed in the fighting.

“The process is to a large extent completed,” Davutoglu was reported as telling reporters on his plane travelling to London. “It won’t be like with old operations, withdrawing after streets are cleansed. There will be a more orderly security presence,” the Yeni Safak daily quoted him as saying. “The goal is to build a public order…in which no illegal structure can take control of any streets.”

For much of the 31-year insurgency, conflict has focused the countryside, but the latest violence has been in urban areas.

The army says that during the campaign it has removed trenches and barricades set up by PKK youth wing members to keep security forces out. Thousands of locals have left the towns hit by conflict, many complaining of indiscriminate operations.

Davutoglu’s comments were published after the governor of Sirnak province said a round-the-clock curfew in the town of Silopi, near the Iraqi border, would only be enforced between 6pm and 5am from Tuesday.

“The operation in Silopi has been completed to a large extent. Ditches have been filled in and barricades lifted. A new security structure will be implemented there,” Davutoglu told a news conference in London broadcast on Turkish television.

Silopi, a southeastern town bordering Iraq, has been at the heart of government’s large-scale campaign, along with the adjacent town Cizre bordering Syria and the historic district of Sur in mainly Kurdish Diyarbakir province.

He said the new security structures will also be established in Cizre and Sur, which still remain under 24-hour curfew.

Davutoglu said the administrative centres of Sirnak and Hakkari would be moved to Cizre and Yuksekova respectively as the mountainous town of Sirnak was in a confined area, Milliyet newspaper reported.

There was a similar plan to move the administrative centre of Hakkari province, on the Iraqi and Iranian borders, to Yuksekova because of better security and service infrastructure there.

Davutoglu’s plan has drawn criticism from HDP co-chair Figen Yuksekdag. “Let’s say you have carried a transfer of the town, where will you be shipping the 6 million people that voted for HDP?” she told HDP lawmakers at the parliament.

The PKK, which says it is fighting for autonomy for turkey’s Kurds, is designated a terrorist group by turkey, the United States and European Union.

Ankara launched a peace process with the PKK’s jailed leader Abdullah Ocalan in late 2012, but it ground to a halt early in 2015 ahead of a general election.

President Tayyip Erdogan said last week some 300 police officers and soldiers have died in the conflict since July.