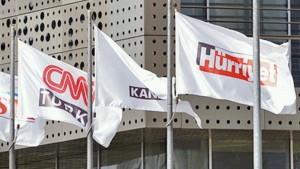 Turkish prosecutors have begun investigating a leading media group for “terrorist propaganda” over images of the fighting between government forces and Kurdish militants, the state-run Anatolia news agency reported on Tuesday.

The investigation into the Dogan Media Group, which owns the independent Hurriyet daily, CNN Turk channel and other outlets, was triggered by its publication of “uncensored” images of Turkish soldiers killed in August, among other images, Anatolia said.