You are here: Home / MidEastGulf / Turkey kills ‘up to 200’ US-backed Kurdish rebels in Syria 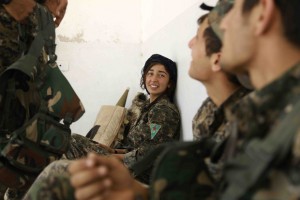 The jets hit 18 targets in Maarrat Umm Hawsh, a region north of the city of Aleppo, the official news agency Anadolu said.

The army claimed 160 to 200 militants from the YPG (People’s Protection Units) militia were killed in the strikes on Wednesday night.

The Syrian Observatory for Human Rights confirmed the raids but could not give a death toll.

The figure from the Turkish armed forces has yet to be independently confirmed.

The PKK, proscribed as a terrorist organisation by the United States and the European Union, has waged a bloody insurgency against the Turkish state since 1984.

Tensions between Turkey and the US have increased over the YPG whom Washington views as an effective force against the Islamic State group in Syria.

But Ankara has repeatedly said it will not allow a “terror corridor” on its southern border and wants to prevent the joining of the Kurdish “cantons” of Afrin and Kobane.

The goal of the operation was to remove IS from its border – which last month Ankara said it achieved – while also aiming to halt the westward advance of the YPG.

President Recep Tayyip Erdogan said on Wednesday Turkey would not “wait for terrorist organisations to come and attack us” during a speech in Ankara.