You are here: Home / Europe / Turkey: ISIS recruits from ’90 different countries’ have crossed our borders 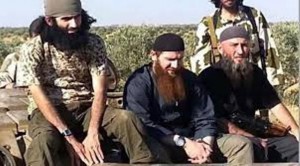 Turkish Foreign Minister Mevlut Cavusoglu claimed that ISIS recruits from “90 different countries” have passed through his country en route to Syria, a security crisis he described as “not a sustainable situation” and “a significant threat to us.”

“Once they enter our country, it becomes very difficult to control our borders,” Cavusoglu said at a press conference in advance of the NATO Foreign Ministers meeting in Antalya, as reported by Hurriyet Daily News. “We have to rid the region of terrorism. For this we need determined policies.”

He viewed the current U.S.-backed plan to train moderate Syrian rebels on Turkish territory as a good start but wanted “further steps” to be taken against the Islamic State—steps even further than airstrikes.

Newsweek reports that Cavusoglu estimated Turkey has issued 13,800 travel bans against suspected militants trying to cross into Syria. The Foreign Minister has previously stated that closing the border with Syria completely is impossible—”we can’t put a soldier on every inch”—and completely blocking travel between Turkey and Syria would make it too difficult to assist refugees from Syria’s civil war.