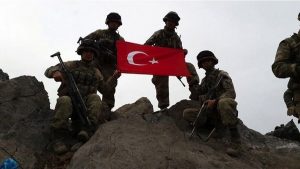 Turkish-Iranian tensions are rising over Turkey’s ongoing military operations against Kurdish militants in northern Iraq. The regional rivals are engaged in increasingly bitter diplomatic sparring as Ankara threatens to expand its Iraqi operations to a strategically important region used by an Iranian-backed militia, like reported by voanews.com.

“We do not accept at all, be it Turkey or any other country, to intervene in Iraq militarily or advance or have a military presence in Iraq,” Iran’s ambassador to Iraq, Iraj Masjedi, was quoted as saying in an interview broadcast Saturday.

Turkey’s Iraq envoy, Fatih Yildiz, shot back in a tweet, “[Masjedi is] the last person to lecture Turkey” about respecting Iraq’s borders.

According to Turkish media reports, the Turkish foreign office summoned Iran’s ambassador, Mohammad Farazmand, to tell him that Turkey expected Iran to back Turkey’s “fight against terrorism.”

Turkish Interior Minister Suleyman Soylu provoked Tehran’s anger claiming Sunday, Iran was harboring “525 terrorists.” Turkey’s ambassador to Iran, Derya Ors, was then summoned by the Iranian foreign ministry to receive an official protest and denial that Iran offers any support to terrorist groups and is serious in fighting terrorism.

Turkey’s ongoing military operations into Iraq against the Kurdistan Workers Party (PKK) are at the center of the increasingly bitter diplomatic sparring between Tehran and Ankara. The PKK is waging a decades-long insurgency against Turkey from bases across the border in northern Iraq. The United States and the European Union both designate the PKK as a terrorist organization.

Analysts say Tehran sees Turkey’s widening presence in Iraq as encroaching on its sphere of influence. “The military presence of Turkey in Northern Iraq is a fact that does not make Iran happy,” said Zaur Gasimov, a regional expert at Bonn University.

But Ankara is vowing to expand its Iraqi operations after 13 Turkish citizens being held hostage by the PKK were killed during a February raid by Turkish forces on a Kurdish militant base in Iraq. “From now on, nowhere is safe for terrorists, neither Qandil nor Sinjar or Syria,” said Turkish President Recep Tayyip Erdogan.

Devlet Bahceli, leader of the MHP, the parliamentary coalition partner of Erdogan’s ruling AKP, said a military operation on Iraq’s Sinjar region was, ”a matter of life and death.”

The Sinjar region, or Shengal in Kurdish, is located on Iraq’s border with Syria. Islamic State was ousted from the area by a coalition of Kurdish forces, including the PKK.

Ankara says Sinjar is a critical logistical base for the PKK to supply its affiliates based in Syria that are part of the U.S.-backed Syrian Democratic Forces. The region is also an important base for Iranian-backed militias.

The Sinjar agreement signed in October 2020 by the Iraqi Kurdistan Regional Government and Iraq’s federal government sought to remove the PKK. But Ankara says the PKK never left the region, claiming its forces merged with local militias.

“In Iraqi Shengal area, the PKK-affiliated groups are working with the Iranian backed militias of the Hashdi al-Shaabi or PMF,” said Galip Dalay of the London-based Chatham House. “There is a tacit understanding between Iran and PKK activists, be it in Iraq or Syria.”

Tehran denies any cooperation with the PKK.

The Turkish military has launched numerous airstrikes against Sinjar in the last year. But Ankara is pressing Baghdad for a joint land operation to clear the region of Kurdish militants.

“We can say that we are determined to wipe out the terrorists as a result of our cooperation with both the regional administration and Baghdad,” said Hulusi Akar, Turkish defense chief, during a visit to Iraq in January.

In a further ratcheting up of tensions, local media reports claim the Iranian-backed militia of the PMF is reinforcing its presence in Sinjar, deploying three new brigades, following Turkey’s latest threats to intervene.

Analysts say it’s likely the Turkish military can overwhelm local militias in Sinjar. But the diplomatic cost to Ankara could prove high, and risk further stoking tensions with its powerful neighbor Iran for potentially only short-term military gains.