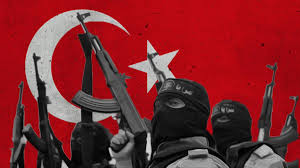 Turkey is preparing to send a new batch of Syrian mercenaries to Libya amid international calls for the removal of all foreign fighters from the country, like reported by aawsat.com.

The Syrian Observatory for Human Rights (SOHR) has revealed that Ankara’s current preparations to send new fighters come only a few days after it canceled the return of 140 mercenaries from Libya to Syria for unknown reasons.

This came as national parties reiterated calls for the withdrawal of foreign forces and mercenaries from Libya, in the implementation of the agreement of the parties to the conflict in October 2020.

French Foreign Minister Foreign Affairs Jean-Yves Le Drian also called on Friday for the necessity of the departure of foreign forces and mercenaries from Libya.

He confirmed his country’s support for international efforts to end the political crisis and end foreign interference in this country.

He discussed with the UN Secretary-General’s special envoy to Libya, Jan Kubic, means to support the political transition.

Last week, the 5+5 Joint Military Commission (JMC) welcomed the outcomes of the Libyan Political Dialogue Forum (LPDF), which resulted in the selection of a unified interim executive authority.

The JMC stressed that it is fully committed to implementing all provisions of the ceasefire deal, calling for the removal of mercenaries and foreign fighters from the Libyan territory immediately.

It called on the interim executives “to agree swiftly on the formation of a new, inclusive government,” prepare for presidential and parliamentary elections scheduled for December 24, improve services for the Libyan people and launch a comprehensive national reconciliation process.

Notably, Turkey stressed that its forces are allowed to remain in Libya as long as the understanding it struck with the Tripoli-based Government of National Accord (GNA) in 2019 remains effective.

“There can be no talk of a solution in Libya” without Turkey, declared presidential spokesman Ibrahim Kalin.

On Tuesday, Turkish President Recep Tayyip Erdogan said that Ankara will discuss withdrawing its forces from Libya if other foreign troops are withdrawn first.

He claimed that Turkish armed forces personnel were deployed in Libya solely to train units loyal to the GNA.

“Mercenaries have come from various regions of Libya, but Macron is only bothered by Turkey’s presence.”

A ceasefire agreement struck between the Libyan warring parties in October 2020 calls for all foreign forces and mercenaries to quit Libya within three months. The January 2021 deadline has since passed with no pullout.