You are here: Home / MidEastGulf / Turkey has no immediate plans for Syria incursion, but ready for any imminent threat 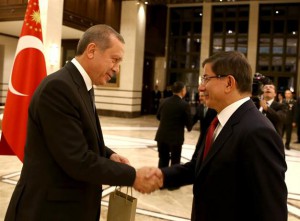 Turkey has no immediate plans for any incursion into Syria, Prime Minister Ahmet Davutoğlu has said, while, however, cautioning the country would not wait for “tomorrow” in case of an imminent threat posed against its security.

“It’s correct that we have taken precautions to protect our border. If there’s any circumstance across the border that threatens Turkish security, orders to act have been given,” Davutoğlu said late on July 2.

“Nobody should have the expectation that Turkey will enter Syria tomorrow or in the near term,” the prime minister, however, noted, as he described such assumptions as “speculative” in an interview with private Kanal 7 channel.

Speculations have mounted recently, particularly since President Recep Tayyip Erdoğan said he would “never allow” the formation of an autonomous Kurdish state in Syrian territory. Consecutively, pro-government newspapers have trumpeted suggestions of an intervention, including the creation of a 110-by-33 kilometer “buffer zone” or “safe zone” in Syria’s Jarablus region, now controlled by the Islamic State of Iraq and the Levant (ISIL).

“If anything occurred that were to threaten Turkish security, we wouldn’t wait for tomorrow, we would go right in. But it’s wrong to expect that Turkey would undertake such a unilateral intervention in the immediate term if there is no such risk,” Davutoğlu said.

Early this week, the U.S. State Department said it had no “solid evidence” that Turkey was considering a buffer zone in Syria, adding that such a move would have “serious logistical challenges.”

Officials in Ankara, speaking on condition of anonymity, said Turkey was in the end unlikely to act alone.