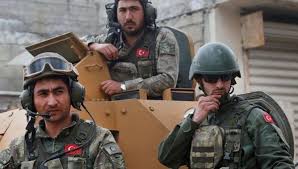 The signing of a military agreement with Niger, a neighbouring country of Libya, reflects Turkey’s interest to have a foothold in a country adjacent to Libya, The New Khalij reported.

The agreement was reached during last week’s tour by the Turkish Foreign Minister Mevlüt Çavuşoğlu of Africa, as Niger was among the African countries he visited.

Çavuşoğlu met with President of Niger Mahamadou Issoufou, and both sides discussed the effects of the unstable security situation in Libya on their countries.

The New Khalij disclosed that Turkey, which has military agreements with Libya, does not have ground borders with it. Therefore, it expected that it would be difficult for it to deal with the issue when it comes to military confrontation with Egypt, which supports the renegade Libyan Commander Khalifa Haftar.

Consequently, The New Khalij explained that there is a possibility of a ground confrontation in light of the continuous remarks by Egypt’s President Abdel-Fattah Al-Sisi, who continues pledging to stop Turkish support for the UN-backed Libyan government in Tripoli.

During the visit to Niger, Çavuşoğlu expressed: “We would like to make a contribution to Niger’s development in the areas of transportation, construction, energy, mining and agriculture.”

As part of the Turkish cooperation with Africa, Anadolu Agency reported that the Turkish government has donated millions of dollars for infrastructure development on the continent and has sponsored hundreds of African students.

Turkey’s presence is felt across the continent, where there are a number of Turkish organisations, including the Turkish Cooperation and Coordination Agency (TIKA), Maarif Foundation and Yunus Emre Institute, among others.