You are here: Home / MidEastGulf / Turkey fighting Kurds under pretext of combatting ISIS in Syria 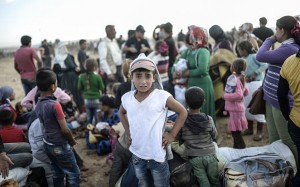 The Rojava Self-Administration in northern Syria said in a public statement that the main goal of Turkey’s intervention into Syria’s Jarabulus is to ‘eliminate our democratic project’.

According to the Kurds, the Jarabulus operation is the result of an agreement between the Syrian government and Turkey.

The Rojava administration compared the ongoing Syrian-Turkish cooperation against the Kurds to the Adana agreement in 1998, which was signed between Ankara and Damascus against the Kurds, which led to expelling of the Kurdistan Workers Party’s (PKK) leader Abdullah Ocalan, which led to his eventual arrest in 1999.

“The Turkish operations in Jarablus don’t target ISIS, because its clear ISIS has withdrawn from the city before the Turkish-backed rebel groups launched the operation to take Jarabulus,” said Nassan, a former official in the Kobane administration.

“Turkey is fighting the Kurds under the excuse of fighting terrorism; they aim at taking over the whole region west of the Euphrates, and maybe going further towards Raqqa to stop Kurdish hopes of making a federal or autonomous region in northern Syria,” he told ARA News.

Kurdish officials suggest that the Jarabulus operation took place after a Turkish outreach towards Russia, Iran and Assad.

“These critical developments are taking place due to regional and international agreements between Turkey, Russia, US, Iran and the Syrian regime against Kurds,” Nassan argued.

U.S. Vice President Joe Biden called on Kurds on Wednesday to move back across the Euphrates river, in a press conference with Turkey’s Prime Minister Binali Yildirim in Ankara, in a clear sign of support to Turkey.

However, the Kurdish politician emphasized that Kurdish forces of the People Protection Units (YPG) had already declared they will withdraw from the Euprhates if the fighting against ISIS is finished there. “And the local fighters of the Manbij Military Council will protect the liberated regions, so the local people are already administrating themselves there,” he said.

In the meantime, the co-head of the Democratic Union Party in Syria (PYD) Salih Muslim said that Turkey is entering a Syrian quagmire, and ‘will be defeated as Daesh’.