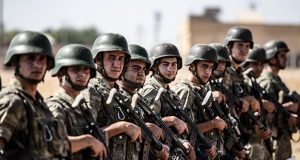 Turkey’s parliament approved the continued deployment of its forces serving in the Gulf of Aden, Somalia and the Red Sea, the Andaolu Agency reported today.

Turkish forces will be serving in the region until 10 February 2019. The military deployment has been extended ten times already.

Yemen is currently enduring a civil war which erupted in September 2014, when the Houthi rebels took-over the capital Sana’a. A Saudi-led coalition was invited in March 2015 to neutralise territorial threats by the group.

The renewal comes off the back of last month’s Turkish defence plan to deploy 60,000 troops in bases abroad, including Qatar.

Turkey already has 3,000 troops deployed near the Red Sea in Somalia, in addition to a military base in Sudan’s Suakin Island.