You are here: Home / Analysis / Turkey, Erdogan’s arc of destabilization in the Middle East 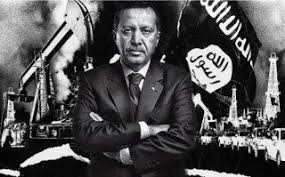 Turkish forces are at the present time bolstering newly constructed outposts in Iraqi Kurdistan. The Turks have established five positions on mountainous terrain near the villages of Sharanish and Banka, in the Zakho area adjoining the border with Turkey, since commencing an operation in the area in mid-June. Troops have been transported in by helicopter to man the new positions, like reported by jpost.com.

This is the latest phase in an operation that has brought the Turkish Armed Forces 30 km. inside Iraqi Kurdish territory. Operation Claw Tiger was launched on June 17, following Turkish air attacks on targets Ankara had identified as associated with the PKK at a number of sites in the Kurdish Regional Government (KRG)-controlled area. The areas destroyed in the airstrikes included a number of Yazidi villages in the Mount Sinjar area. A refugee camp at Makhmur was also targeted.

Elements of the 1st and 5th Commando Brigades, both elite Turkish airborne formations, are taking part in the operation on the ground. Iranian artillery shelled the Choman area of the Qandil Mountains on June 16, in a move widely interpreted as supportive of the Turkish offensive.
Despite the considerable dimensions of the current offensive, Kurdish sources do not consider that it represents the beginning of a long-awaited general Turkish attempt to destroy the PKK in Qandil.

Rather, they see it as continuing an established pattern of ongoing Turkish operations in Kurdish-controlled northern Iraq, conducted without inquiry as to the wishes of the local Kurdish authorities, and intended to establish a widening Turkish military infrastructure/buffer zone in the area adjoining the border.

Turkish media reports largely concur. According to a recent article in the Hurriyet newspaper, 12 permanent observation posts had already been established in the KRG-controlled area since 2016. Hurriyet quoted Turkish security officials who depicted the PKK as seeking to establish a corridor for its forces on the Iranian border in Sulaimaniya province, via Sinjar, to the Kurdish-controlled area in northeast Syria.

Ankara considers the YPG (People’s Protection Units), which is the main force in northeast Syria, to be a franchise of the PKK. The Turkish operation, according to Hurriyet, is intended to break this corridor. It should be noted that the current deployment of Turkish forces is not sufficiently deep to cut any such notional line.

The Turkish newspaper likened the current effort to previous Turkish operations in northern Syria in 2016 and 2019 which resulted in Turkish occupation of two noncontiguous blocs of territory along the Syrian-Turkish border.

Kurdish sources, meanwhile, suggest an additional, domestic political motivation for the current operation. They note the dire state of the Turkish economy, and the consequent loss of public support, indicated in a number of recent polls, for the ruling Islamist Justice and Development Party and its main ally, the far-right Nationalist Action Party. According to this perspective, the Turkish operation is intended to rally the government’s political base and to distract from socioeconomic failure.

This element notwithstanding, Operation Claw Tiger fits into an arc of Turkish military assertiveness currently extending from northern Iraq, across northern Syria, going down via the Mediterranean and via Israel, and reaching Libya. Turkey also has a military presence to the south and east of this area, in Qatar, and in Somalia.

In the Mediterranean, Turkey is challenging Greece, Cyprus, France and Israel for the gas riches beneath the water.

Via its SADAT military company, Ankara is deeply engaged in support of Hamas against Israel. SADAT, sometimes referred to as Erdogan’s Revolutionary Guards, is involved in other, similarly murky ends of Turkey’s regional assertion. The company, founded by the Turkish president’s military adviser Gen. Adnan Tanriverdi, took responsibility for the training of Syrian rebels under Turkey’s flag. These forces were subsequently deployed against the Syrian Kurds in 2019-20.

They are now engaged in Libya, fighting against the Libyan National Army of Field Marshal Khalifa Haftar. SADAT, incidentally, is currently also involved in training Sunni Islamist forces loyal to the Government of National Accord in Libya. The Africa Intelligence website and Asharq al-Awsat newspaper reported this week that the Turkish company has signed an agreement to this end with Security Side, a Libyan security company headed by one Fawzi Abu Kattaf, a Palestinian Hamas and Muslim Brotherhood supporter with close ties to Qatar.

WHAT DOES this flurry of overt and semi-covert Turkish regional military assertion amount to? Can a common theme be established?

In Syria and Iraq, obviously, Ankara is, on the face of it, challenging its old PKK enemy. But there are additional layers. Erdogan was first to support the Syrian Sunni Arab insurgency. He has proved its last and most faithful ally. Western states, discouraged by the insurgency’s Islamist and jihadi nature, peeled away from it years ago. Turkey, untroubled by these loyalties because it shares them, has remained.

The enclaves in northern Syria do serve to bisect the area of Kurdish control, and in Afrin a large-scale ethnic cleansing of Kurds has taken place. But Turkey is now pouring money and forces into northwest Syria, in an effort to shore up this enclave and ensure its semi-permanence. This is not only about opposing Kurdish aspirations. It is about establishing a part of Syria intended to be forever Turkish (and Sunni Islamist).

In Israel, the West Bank and Gaza, Erdogan wants to lay claim to the cause of recovering al-Aqsa from non-Muslim custodianship. Covert military support to Hamas runs alongside active soft power efforts. These are managed by the government aid agency TIKA. Tens of millions of dollars are spent each year, via projects such as the Turkish Culture Center on Hashalshelet Street in Jerusalem’s Old City.

In the Mediterranean, the interests, of course, are related to Turkey’s need for gas supplies. But the bald assertiveness of laying claim, together with the client government in Tripoli, to a massive swath of the Eastern Mediterranean and thus stymieing plans by Israel, Greece and Cyprus to pipe gas to Europe has the additional advantage for Turkey of depicting itself as the regional dominant force.

In Libya, finally, again geostrategic and ideological aspects coincide: the government of Fayez al-Sarraj is kept in place by Muslim Brotherhood-associated forces. He represents a last remnant of the hoped-for alliance which Erdogan had thought to lead, before the military coup in Egypt of 2013, the departure of the Ennahda Party from power in Tunisia and the revival of Bashar Assad’s fortunes in Syria.

So, all the way from Zakho province in northwest Iraq to Tripoli on Libya’s African coast, Turkey is flexing its muscles.

It is an independent, ambitious foreign policy, with not the slightest nod to the “pro-Western” and “pro-NATO” orientation that Turkey’s Western apologists like to recall. It has its origin in a combination of nationalist assertiveness, tinged with Ottoman-era nostalgia, and the ambitions of Muslim Brotherhood-style Sunni political Islam.

This is a potent mix, which is not required to place itself before the judgment of the Turkish voter until 2023. As of now, its main impact is an arc of destabilization, stretching across land and sea from Iraq to Libya.