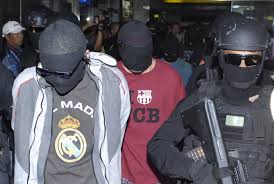 Turkish authorities have turned away 1,200 people who were traveling through Turkey in an attempt to join the ranks of the Islamic State, local media reported, citing country’s Foreign Minister Mevlut Cavusoglu.

Turkey regularly detains foreign nationals, including Europeans, preventing them from traveling to Syria and Iraq to join extremist groups, such as the Islamic State. In March, Turkey urged the European Union to share more intelligence to contain foreign fighters trying to cross the Turkish border.

Speaking at a training program for foreign diplomats, Turkish Foreign Minister Mevlut Cavusoglu pointed out that Turkey had imposed travel bans on over 12,500 foreign fighters in an attempt to contain the flow of extremists to Syria, according to Hurriyet Daily News. The minister stressed that the majority of the fighters were caught due to the efforts of the country’s own intelligence.

In early April, it was reported that Turkey had arrested nine British nationals attempting to illegally cross the Syrian border. The group detained near Hatay province included three men, two women and four children. The detainees, who were the largest single group of Britons captured on the way to jihadi-controlled areas were sent back to the United Kingdom.