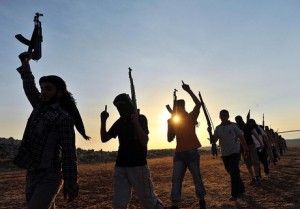 Four former senior Turkish prosecutors and an ex-military commander went on trial on Thursday over the interception last year of an alleged consignment of arms bound for Syria, with the court immediately imposing a secrecy order on the hugely controversial case.

The case goes to the heart of claims — repeated on occasion by the West but denied by Turkey — that Ankara has worked far too closely with Islamist rebels in the hope of ousting Syrian President Bashar Al Assad.

The five, who were arrested earlier this year, are charged with seeking to overthrow the government and revealing state security information. They could face life in prison if found guilty.

The trial opened at a criminal court within Turkey’s Supreme Court in Ankara under heavy security, with the judge immediately imposing the secrecy order, the official Anatolia news agency reported.

The order means the trial will be held behind closed doors and its proceedings with not be made public.

The trial relates to the stopping and searching of trucks near the Syrian border in January 2014 which were suspected of smuggling arms into Syria.

Local security forces found the trucks were taking not only a consignment of arms but also Turkish National Intelligence Organisation (MIT) personnel.

Turkey has vehemently denied aiding Islamist rebels in Syria, such as Daesh, although it wants to see Al Assad toppled.

The four prosecutors on trial – including former federal prosecutor for the Adana region Suleyman Bagriyanik — issued orders for the search of the vehicles.

Also standing trial is former Turkish military gendarmerie colonel Ozkan Cokay, who is believed to have implemented the search order on the ground.

Dozens of rank-and-file soldiers and police have also been arrested in the investigation but it is not immediately clear when they will go on trial.

The Turkish authorities have sought to link the affair to US-based preacher Fethullah Gulen who President Recep Tayyip Erdogan accuses of running a parallel state through supporters in the judiciary and police with the aim of usurping him.

But in May, Turkish opposition daily Cumhuriyet published footage of the alleged arms delivery showing mortar shells, grenade launchers and tens of thousands of rounds of ammunition.

Erdogan threatened Cumhuriyet’s editor in chief Can Dundar after over the story, vowing he “will pay a heavy price.”