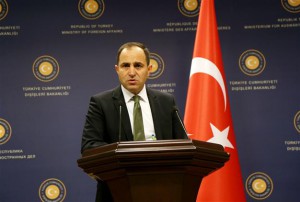 Turkey is not eager to embrace a recently-proposed Russian initiative to form a regional alliance to battle the Islamic State of Iraq and the Levant (ISIL).

Turkish Foreign Ministry spokesperson Tanju Bilgiç said any other plan regarding ISIL other than the ongoing international coalition effort is not on Turkey’s agenda.

Asked about the Russian proposal and the recent meeting between Foreign Minister Mevlüt Çavuşoğlu and his Russian counterpart, Sergey Lavrov, Bilgiç said Syrian issues were one of the topics with the Russian FM.

“The international community already conducts a battle against Daesh [ISIL]. Turkey is part of an international coalition and provides concrete support to these efforts. Apart from that, we don’t have any other methods or plan in our agenda concerning the struggle against Daesh,” Bilgiç said, speaking at a press conference on Aug.7.

Russian President Vladimir Putin earlier expressed his country’s readiness to facilitate dialogue between countries in the region, including Turkey and Saudi Arabia, to join a regional anti-terror coalition.

The Iranian foreign minister will pay a visit to Turkey on Aug. 11 and the U.N. secretary general’s special envoy for Cyprus, Espen Barth Eide, will visit Ankara on Aug. 20, Bilgiç said.