You are here: Home / MidEastGulf / Turkey continues to shell PYD positions in Syria 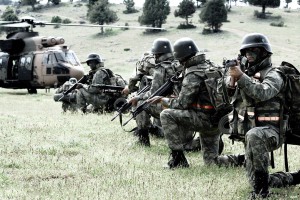 Turkish troops are continuing to shell positions of the PYD in Syria’s Azaz district located in the northern countryside of Aleppo, Turkish security sources confirmed to Anadolu Agency on Sunday.

The PYD is the Syrian branch of the terrorist PKK organization which has targeted security forces as well as civilians in Turkey since 1984.

The shelling was first reported Saturday night when Turkey’s Prime Minister Ahmet Davutoglu said that the army returned artillery fire after coming under attack from PYD forces based around Azaz in northern Syria. Davutoglu had said that the response was within Turkey’s rules of engagement.

According to Turkish military, the Akcabaglar base in Turkey’s border province of Kilis was shelled Saturday by “PYD/PKK” forces.

Azaz in Aleppo province has been the scene of recent heavy fighting and the YPG have advanced to Azaz — just six kilometers (four miles) from the Turkish border.