You are here: Home / MidEastGulf / Turkey colludes with Jabhat al-Nusra 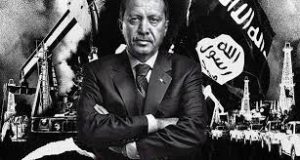 In mid-September, the guarantor states of the Syrian ceasefire regime (Iran, Russia and Turkey) in Astana signed an agreement on creating the forth de-escalation zone including Idlib and some parts of Aleppo, Latakia and Hama Governorates.

According to the agreement, the Turkish army invasion in Idlib began with mass artillery shelling of al-Nusra positions on October 8, 2017. In less than 24 hours, however, a number of media reported that the Turkish Army units had been spotted in Atmah accompanied by a convoy of al-Nusra militants. The locals say the Turkish troops were moving towards Aleppo to allegedly hold talks with the terrorists’ field commanders. The Syrian opposition Al-Jisr TV-Channel also confirmed this information.

Inside Syria Media Center military correspondents in the Free Syrian Army (FSA) claim that the Turkish Command made a deal with al-Nusra on the withdrawal of militants from Idlib to Hama province. A soon large-scale offensive is also planned against the Syrian army positions in Masyaf and As-Suqaylabiyah, located north-west to Hama.

The fact is that the Syrian army backed by the allied forces continue their advance towards Idlib now.

The fierce clashes between the government forces and al-Nusra are well under way along the Idlib-Hama border. Al-Nusra suffers heavy losses in this battle.

Obviously, the Turkish side has its own plan how to gain control over the northern part of Syria. Despite the agreement with Iran and Russia, Ankara once again took a decision to collude with the terrorists and hinder the successful advance of the Syrian troops towards Idlib.