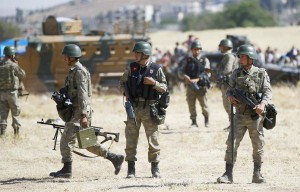 A Turkish news agency says authorities have begun constructing a wall along a 82-kilometer (50-mile) stretch of Turkey’s border with Syria that is under the control of the Islamic State group on the Syrian side.

The Dogan News Agency says Thursday that 4 meter-high (13-foot) slabs were being positioned along the border in the provinces of Kilis and Gaziantep. Video footage showed construction vehicles lining concrete blocks along the border.

A government official could not confirm the report.

Turkey has stepped up security along its border to prevent IS militants from entering Syria and crossing back into Turkey.

In August, Turkey also began constructing a wall along the border at the town Reyhanli, a main smuggling point southwest of Kilis.