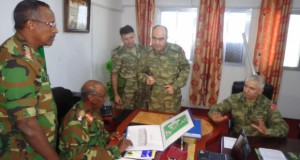 Turkey builds a military training base in Somalia to assist the army and government of the African country, the newspaper Today”s Zaman reported.

Emel Tekin, head of the Foreign Ministry department responsible for Somalia , said that establishing a military base in Mogadishu, a first for Turkey, aims at preparing soldiers of that country and said that the initiative is part of an agreement of military cooperation.

This remark by Emel Tekin was said during deliberations of the Defense Committee of the Parliament, in which the agreement on defense industry cooperation between Turkey and Somalia was approved last December 9, the newspaper added.

Colonel Murat Yaman said at the Committee meeting that the agreement is a framework to boost bilateral cooperation in the field of defense.

He added that this agreement is based in other agreements signed with Mogadishu six years ago, for military financial cooperation and military training.

Turkey provided defense assistance to Somalia since then in order to support the security forces.

The Turkish army is also building a military school in Somalia for educating and training officer corps and noncommissioned officers.