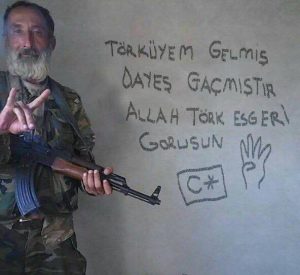 Turkish-backed rebels clashed with Syrian Kurdish forces in a northwestern Syrian village on Monday in escalating violence between the two sides, like reported by ekurd.net.

The clashes took place around the village of Ain Daqna and the nearby Menagh Air Base north of Aleppo, while Turkish forces stepped up shelling positions in other areas, Reuters reported citing officials and the Syrian Observatory for Human Rights.

Tensions have mounted between Turkish and Syrian Kurdish forces since early this month after Turkish forces, along with their opposition allies in Syria, attacked Kurds in the Afrin district, one of the Kurdish Cantons in Syrian Kurdistan. The Kurds retaliated with artillery fire.

“There are big clashes happening on the Ain Daqna axis, between us and the Turks and their mercenaries,” Rojhat Roj, a spokesman for the Syrian Kurdish People’s Protection Units (YPG) said.

A member of the Syrian Democratic Forces (SDF), Mostafa Bali, said some Turkish-backed rebels had been killed and captured.

Both the YPG and the SDF are backed by the United States in the fight against Islamic State (IS) militants in Raqqa, while Turkey sees the YPG as an extension of the Kurdistan Workers’ Party (PKK), considered a terrorist organization by Ankara.

The YPG is leading the U.S.-backed campaign against IS militants to liberate the militants-held stronghold of Raqqa, some 200 kilometers to the east of Aleppo where tensions between the Turkish army and the YPG have been increased in recent weeks.

Clashes between the two U.S. allies, the YPG and Turkey, have caused tension between Ankara and Washington. Turkey has criticized the U.S. decision to arm the YPG for the IS fight in Syria.

U.S regards the Syrian Kurdish Democratic Union Party PYD and its powerful military wing YPG, which is part of Kurd-Arab SDF alliance, as key ally against Islamic State and the most effective fighting force against IS in Syria and has provided them with arms, air support as well as the military advisers.

The YPG, which has 60,000 fighters, has seized swathes of Syria from IS.

The Kurdish-led SDF announced on Sunday they have achieved a significant advance against the Islamic State (IS) in Raqqa after securing a Yarmouk neighborhood in the southwest from the militant group.