You are here: Home / MidEastGulf / Turkey asks world to ignore campaign against Kurds 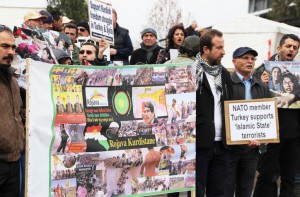 Turkey’s prime minister will tell world leaders next week that Ankara can play a key role in stopping a spread of terrorism, including Islamic State, but expected understanding for its own battle against Kurdish militants.

Washington, while considering the Kurdistan Workers Party (PKK) a terrorist group, sees the affiliated YPG Kurdish militia in Syria as its chief ally in fighting Islamic State there.

The link unsettles Turkey and is likely to be raised in more explicit terms by Prime Minister Ahmet Davutoğlu when the United Nations General Assembly convenes in New York next week.

NATO member Turkey has opened its air bases to a US-led coalition against Islamic State fighters, but the focus of its own air strikes has been Kurdistan Workers Party (PKK) militants. Fighting has escalated since a truce between the PKK, seeking broader Kurdish rights, and the army broke down in July.

The fighting, in the runup to November elections, has raised suspicions among opponents of President Tayyip Erdoğan that the priority is to check Kurdish territorial ambitions rather than to rout the Islamist insurgents. The fighting, which began in 1984, has cost over 40,000 lives.

“Turkey will share its experience with world leaders to seek support to prevent the Middle East from becoming a region that exports terrorism to the world,” the senior official said.

“The Prime Minister will also highlight that certain countries and organisations should refrain from attitudes that encourage and support PKK and other groups for permanent stability in the Middle East,” the official said.

The remarks, apparently directed at Washington, were echoed by Davutoğlu before his departure for New York.

“The main emphasis here is there is no ‘good or bad terrorist,” he said. “Unfortunately sometimes, we do not see the international community reacting to PKK which has killed many civilians and security forces over the past two months with the same attitude it displays towards Islamic State.”

Comments by US State Department spokesman John Kirby this week have highlighted the fundamental disagreement between Washington and Ankara. “We don’t consider the YPG a terrorist organisation,” Kirby said during a briefing.

“And they have proven successful against ISIL inside Syria,” he said, referring to an acronym of the Sunni hardline group Islamic State.

Turkey fears Kurdish groups in Turkey, Syria and Iraq could press for the creation of an independent Kurdish state. Ankara has been harshly criticised, not least by the EU it seeks to join, for its handling of the Kurdish conflict. Erdoğan launched a peace process three years ago but that appears now in tatters.

The other key topic in Davutoğlu’s visit will be the flow of tens of thousands of migrants trying to reach Europe, many from camps in Turkey, Jordan and Lebanon, threatening the future of the cherished passport-free Schengen zone.

Turkey has been at the forefront of the refugee crisis since 2011, when the Syrian uprising begun and has spent $7.6 billion caring for 2.2 million Syrian refugees.

The EU is now looking for ways to persuade Turkey to do more to keep Syrian refugees on its territory and stop them moving into Europe.

“The main emphasis will be all countries particularly Europe abandoning these immigration policies based on security,” another senior official said. “There are all sorts of people among the migrants but to block the process thinking Islamic State militants might be among them is far from productive.”

“This is hardly about money,” the official said. “A comprehensive cooperation and a long-term plan is needed,” he added.

The Kurds, a mainly Sunni Muslim people with its own language and culture, live mostly in the mountainous region where the borders of Turkey, Iran, Iraq and Syria converge. Despite their long history, the Kurds have never achieved a permanent nation state.

In Turkey, Kurds form about 20% of the population. Turkey has threatened military intervention in Syria if Kurdistan Workers Party (PKK) militants set up camps there. The PKK has fought an armed struggle in southeast Turkey for the past 28 years. An estimated 40,000 people have been killed, most of them Kurds. Prime Minister Tayyip Erdoğan is the first Turkish leader to acknowledge the state’s “mistakes” in its handling of the Kurds and his party has held secret talks with jailed PKK leader Abdullah Ocalan, but the conflict sputters on. Turkey often strikes PKK bases in Iraq’s autonomous Kurdish region and Erdoğan has made any PKK bases in Syria could also be hit.

In Syria, Kurds make up about 8% of the population. Damascus has deprived thousands of Kurds of citizenship, banned the teaching of their language and clamped down on Kurdish political activities. However in April 2011, President Bashar al-Assad vowed to grant citizenship to Kurds in an attempt to cool resentment. In June 2012, Abdulbaset Sieda, a Kurd, was chosen to head the opposition Syrian National Council, but Kurds have taken little part in the anti-Assad uprising. More than 12,000 Syrian Kurds have fled to Iraqi Kurdistan.

In Iraq, Kurds constitute 15-20% of the population. Iraqi Kurdistan, autonomous since 1991, has its own government and armed forces, but still relies on the Baghdad central government for its budget. Since U.S. troops left in 2011, friction has grown between Kurdistan President Masoud Barzani and Iraqi Prime Minister Nuri al-Maliki over territory, oil deals and now Syria. Barzani has helped Syrian Kurdish groups. Maliki, along with his Shi’ite Muslim allies in Iran, is more sympathetic to Assad. Kurds, a majority in the three provinces that make up Iraqi Kurdistan, lay claim to the oil-rich Kirkuk region.

In Iran, Kurds form about 7% of the population. In 2011 Iran pledged to step up military action against PJAK (Party of Free Life of Kurdistan), a PKK offshoot which has sought greater autonomy for Kurdish areas of Iran. Kurds, along with other religious and ethnic minorities, have faced increasing discrimination since President Mahmoud Ahmadinejad came to power in 2005. Iran executed several Kurdish activists in 2009-2010.