You are here: Home / Europe / ‘Turkey acts like ISIS ally, should not be EU member’– Czech president 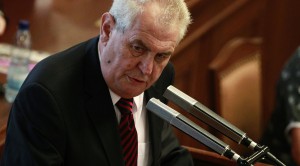 Turkey should not become an EU member, said Czech President Milos Zeman, adding that Ankara sometimes behaves like an Islamic State (IS, formerly ISIS/ISIL) ally, even though Turkey is part of NATO.

“I think Turkey is indeed a member of NATO, but sometimes behaves as if it’s more an ally of Islamic State. It removes oil from Syria which finances Islamic State,” Zeman said, as quoted by Czech newspaper Parlamentni Listy.

The president’s remarks came on Tuesday while addressing voters at the end of a three-day visit to the Czech town of Kadan, North Bohemia, local media reported.

Zeman suggested Turkish policy stems from the principle “the enemy of my enemy is my friend,” referring to Turkey’s suppression of the Kurds, “who are the only ones who have fought effectively with IS,” the newspaper reported.

The president maintained this is the reason why Turkey should be approached with caution and has no reason to be an EU member.

President Zeman also dismissed the EU’s intention to pay €3 billion (US$ 3.28 billion) to Ankara in order to better cater for the needs of 2.2 million Syrian refugees in the country.

“The Roman Empire, before it collapsed, also paid tribute money to barbarians for them not to pilfer its territory. Turkey, on its part, is able to accept these refugees not only because they make up a mere fraction of its overall population, but also because they share the same religion [with Turks],” he said.

He added that he does not see “danger in Islam as such” but in “transferring these [Muslim] habits to Europe.”

In November, Turkey signed an agreement with the EU at a summit in Brussels in which the country will help stem the flow of migrants to Europe in return for €3 billion in support and the re-establishing of talks on EU accession.