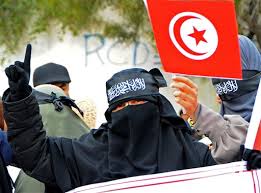 Tunisia has always seemed an unlikely stronghold for radical jihadism, but four years after the Arab Spring the threat from Salafist violence is more urgent than ever.

For 23 years the regime of President Zine al-Abedine Ben Ali sought to control all religious activities tightly and define for Tunisians exactly what their Islam should mean. Small Salafist groups began emerging in the mid-2000s as a reaction against this state monopoly and the brutality they experienced in jail, and were fueled by ideas from Gulf preachers broadcasting on satellite television.

After the fall of Ben Ali, these groups swept into the political vacuum, harnessing widespread frustration and resentment among a disenfranchised urban youth. At first, groups such as Ansar al-Shariah, the first major Salafist organization to emerge, focused on preaching, enforcing their moral code and social activism. They appealed to young, unemployed Tunisians who felt profoundly disinherited by a political and economic system that had always favored the coastal elites. Religious-minded young people sought new avenues of expression as they quickly became disenchanted with the strategic compromises of the mainstream Islamist movement Ennahda, which they regarded as mere “Islam light.” As Ennahda struggled to recruit new young members, so the Salafists grew in number.

Radicalized groups also crossed over into criminality and often became involved in drug and weapon smuggling, particularly across the porous Libyan border. As Libya descended into instability, new opportunist groups began to thrive in the smuggling trade. It became easier for armed men to train in Libya before returning to Tunisia to carry out attacks – the Bardo killers, among many others, were trained across the border.

At first the Ennahda-led coalition government was slow to understand the gravity of the problem and still believed it could moderate extremists by drawing them into one large Islamic family. After two leftist politicians, Chokri Belaid and Mohammad Brahmi, were assassinated in 2013, the government outlawed Ansar al-Shariah and arrested hundreds of young men. Since then, however, the Salafist-jihadi movement has fractured into many small groups. Too often the authorities were unwilling to distinguish between those attracted to the nonviolent preaching of Salafism, who sought to imagine a new religious vision for Tunisia, and the smaller number of radicals intent on violence.

Around 3,000 young people left to fight in Syria and Iraq, often with ISIS, and several hundred others appear to have gone to Libya too. Inside Tunisia several small groups flourished, including the Okba Ibn Nafaa Brigade in the Chaambi Mountains near the Algerian border, who were responsible for killing dozens of security forces in several small operations. They originally had links with the group Al-Qaeda in the Islamic Maghreb, and seem also to be close to ISIS now.

In the face of this challenge, successive governments have tended to mount high-profile sweeping arrest operations. In 2014, at least 1,000 suspects were arrested, often from small cells. In just the first few months of this year, another 400 have been arrested, according to Prime Minister Habib Essid. The Interior Ministry has announced a number of high-profile raids in which suspects have been killed, although sometimes these brought more questions than answers.

Last month, the ministry announced security forces had killed the head of the Okba Ibn Nafaa group, which it said was responsible for the Bardo attack. But the next day a different group, calling themselves Jund al-Khilafah, claimed responsibility for the Bardo attack, declared loyalty to ISIS, and said more attacks would follow.

All governments since 2011 have favored security sector stability over reform. In the first weeks after the uprising, the political police were dissolved, but deep-rooted reform is still lacking, especially in the opaque Interior Ministry. Likewise, the judiciary remains largely unchanged from the Ben Ali era. More recently, new counterterrorism strategies have been adopted, and a new counterterrorism force has been set up.

President Beji Caid Essebsi told Tunisians after the Bardo attack that they were in a war against terrorism, vowing “We will fight them without mercy to our last breath.” But governments have favored the rhetoric of security stabilization over acknowledging the need for a political solution for the socioeconomic causes behind this crisis – alongside a discreet, intelligence-based and highly targeted counterterrorism strategy.